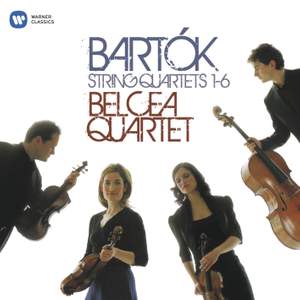 The playing in these endlessly fascinating and rewarding pieces is supremely accomplished. Distinguished Bartók cycles in recent years include those by the Alban Berg (EMI), Emerson (DG) and... — BBC Music Magazine, March 2008, 5 out of 5 stars More…

"The more we immersed ourselves in these works, the more beauty and richness we discovered in them and we very much hope that this appeal will even still increase in future because we definitely consider these quartets to be the greatest masterpieces of the last century in our repertoire." Belcea Quartet

The First Quartet is the most romantic in spirit and actually harbours a love story. It marks an affectionate withdrawal from a late Romantic fin-de-siècle. The Second (1915-1917) takes us some way towards the gritty, hard-hitting Bartók of the mid-late 1920s. By 1927 Bartók, a superb pianist by any standards, was enjoying a worldwide concert career, and soaking up what that world had to offer in musical terms. One probable influence was Alban Berg’s Lyric Suite, an expressive masterpiece that thrives on a plethora of complexities. Bartók’s Third Quartet does likewise, a work that on one level seems to mimic a Hungarian rhapsody (the alternation of fast and slow music) while on the other takes tiny thematic cells and develops them into a teeming nest of musical activity. Bartók’s next two quartets are both cast unconventionally in five movements of a symmetrical, arch-like design. The Fourth (1928) has at its centre an evocative though austere example of Bartók’s ‘night music’ that opens with a rhapsodic cello solo leading in turn to imitated birdsong. The Fifth Quartet (1934) is built on a far larger scale. Bartok modifies the arch form by placing a scherzo at its centre, a syncopated dance movement in Bulgarian rhythm, framed by two slow movements using similar chord sequences. The air of ineffable sadness that hangs over Bartók’s last quartet (1938) reflects not only a swiftly sickening Europe but personal tragedy: his mother’s journey towards death would end in December 1939. All four movements open with the same, heart-rendering ‘mesto’ (sad) motto. Never has a quartet cycle ended quite so equivocally, or sounded a truer warning, one that even today inspires both awe and gratitude.

The playing in these endlessly fascinating and rewarding pieces is supremely accomplished. Distinguished Bartók cycles in recent years include those by the Alban Berg (EMI), Emerson (DG) and the Takács Quartets - but none more vividly conveys the music's visceral excitement.

Bartók's quartets are one of the great musical collision points between modernism and romanticism.
How to handle the tension between their expressive gestures and constructivist designs is one of the abiding issues for performers and one reason why even the plethora of fine available recordings cannot remotely exhaust their riches. Getting the best of all worlds interpretatively is hardly a realistic aim. Even so, there are long stretches where the Belceas come as close to the ideal as any ensemble on disc.
Try the first few minutes of Quartets Nos 2 and 3, and marvel at the gradation of forte and fortissimo, of piano and pianissimo, which helps to give entire movements far more convincing shape than less precisely observant ensembles achieve. Try the outer movements of No 5 and marvel at the gear-changes negotiated smoothly, instantly and unanimously, yet never as ends in themselves, always accompanied by a sense of expressive-dramatic purpose. Try virtually every movement in fact, and revel, as the Belceas do, in the interplay of the lines, even in passages where others seem thankful just to come through unscathed.
Clearly immense thought has been given to tone quality. In the first movement of No 1, for instance, the Belceas point the periodic arrivals on consonant harmonies by withdrawing vibrato, and instantly the as yet not fully mature Bartók's straggly structure gains sharpness of profile.
They apply the same ploy in the much tauter environment of the first movement of No 5, and with similarly revelatory results. At the other extreme, their sustained tonal intensity makes the most barbaric onrushes exhilarating rather than exhausting, neither too streamlined nor too effortful. When the score is bare of instructions, as in the first slow movement of No 5, they take it at its word and uncover a hypnotic, staring blankness. And when the invitation to humour is extended, as in the finale of the same quartet, they seize it with full-blooded, yet never selfserving, relish.
Before surrendering to the power of these performances, one wondered if there was going to be enough ethnic tang and zest, enough wildness and strangeness, enough sultry longing.
We've certainly heard more of those qualities in the first two quartets. Yet the central movement of No 2 is marked molto capriccioso, not barbaro, and that's exactly what comes across, while the coda is pushed daringly close to the edge, sounding like the distant fluttering of giant moths – not as precisely by the book as the Emersons but vastly more imaginative and emotionally telling – while the slow finale has a superbly intense accumulation at its heart.
Pushed for a general reservation, perhaps when a 'speaking' quality is needed in the quasirecitatives, the first violin's colleagues don't quite match her for idiomatic insight. And do the Belceas get to the heart of the matter in the trauma-shaded No 6? Not quite – not by comparison with The Lindsays, anyway, who are generally more prepared to tolerate rough edges for the sake of emotional revelation.
In short, the Belceas are more than worthy rivals to the best on disc and EMI's recording quality is just right.

Try the first few minutes of Quartets Nos2 and 3, and marvel at the gradation of forte and fortissimo, of piano and pianissimo, which helps to give entire movements far more convincing shape than less precisely observant ensembles achieve. In short, the Belceas are more than worthy rivals to the best on disc.