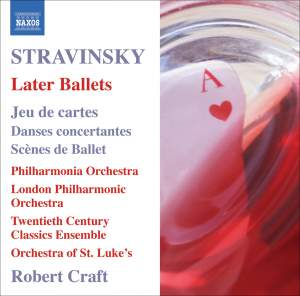 There are times when Craft brings a welcome rhythmic drive to the music, as in parts of Jeu de cartes and quite a lot of Danses concertantes. But energy, nervous excitement, biting wit - all... — BBC Music Magazine, February 2008, More…

First performed by the Chicago Symphony Orchestra under Robert Craft, Variations are the densest music Stravinsky ever wrote, yet the ingenious rhythmic structures allow every note to be heard. Ezra Pound, in a balcony at the Teatro La Fenice for a September 1934 performance of the Capriccio for Piano and Orchestra, wrote: “the piano and orchestra are as two shells of a walnut”. Alban Berg, who had shared the same concert with Stravinsky, remarked to the latter: “I wish I could write such happy music”

There are times when Craft brings a welcome rhythmic drive to the music, as in parts of Jeu de cartes and quite a lot of Danses concertantes. But energy, nervous excitement, biting wit - all these seem in short supply.

This collection of Stravinsky's later ballets represents the composer in lighter mood, making a delightful sequence, very well played and recorded under the authoritative direction of the composer's principal amanuensis. Jeux de cartes ('The Card Game') of 1936 points directly forward to Stravinsky's style in his opera The Rake'sProgress, the piece reflecting his love of the game of poker: the three main sections of the ballet represent first, second and third deals, with the Joker figuring in each. The piece was written for the great choreographer Georges Balanchine.
Craft's performance with the Philharmonia has an aptly clean attack, with the chugging rhythms well lifted, very suitable for ballet.
Danses concertantes represents Stravinsky in even lighter mood, the first major work he wrote after his arrival in the United States. It's fun music full of playfulness, ending with a jolly galloping theme in compound time. Scènes de ballet of 1944 was commissioned for a Broadway show, but sadly, the bars in 5/4 time were too difficult for the theatre orchestra to play, and it had to be abandoned for its original purpose, only to emerge later as a full concert piece and ballet.
Variations, much the shortest item on the disc, represents Stravinsky using 12-tone technique, an uncompromising, densely packed five minutes which makes for difficult listening, while the Capriccio for piano and orchestra of 1929 returns to his jolly and light-hearted mood, the popular rhythms jauntily presented. Mark Wait is an outstanding soloist. Altogether, a delightful collection brilliantly played and recorded.