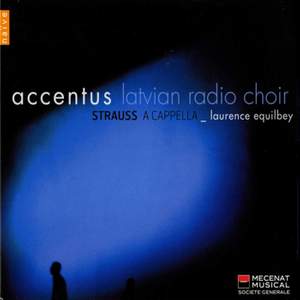 Hearing exquisite Straussian tonal twists sung with such precision and evident love is a treat for both ear and heart. …the Deutsche Motette feels like a near-impossible fusion of the spirit... — BBC Music Magazine, February 2010, 5 out of 5 stars More…

Acclaimed choral and orchestral conductor, Laurence Equilbey, conducts the Latvian Radio Choir along with her own fantastic professional ensemble, Accentus, in a recording showcasing the brilliance of Richard Strauss’ choral music.

This release highlights the inspiration of Bavarian poet Friedrich Rückert upon the choral writing of Richard Strauss. Glimpses of this influence can be found in the ‘Hymne’ from op.34 and the other choruses on this disc, among them the ambitious masterpiece that is Deutsche Motette (German Motet) op.62, the peak of Straussian choral art.

The chamber choir Accentus was founded by Laurence Equilbey in 1991, and is now recognised as one of the leading ensembles in Europe. Accentus' recording of Fauré’s Requiem, released last year, was shortlisted for the 2009 Gramophone Awards in the 'Choral' category.

Hearing exquisite Straussian tonal twists sung with such precision and evident love is a treat for both ear and heart. …the Deutsche Motette feels like a near-impossible fusion of the spirit of Tallis's 40-part Spem in alium with the loveliest pages of Strauss's own Daphne or Ariadne auf Naxos. And conductor Laurence Equilbey and her singers seem equally responsive to both extremes. Incredibly the piece's huge span seems just right - not a moment overlong. The opening couple of minutes of the first of the Zwei Gesänge, 'Der Abend' (Evening) constitute perhaps the most beautiful thing on the whole disc...

This a fine choir - or combination of choirs - tone both gentle and firm, and with a sensitivity to the shadings and modulations so richly characteristic of Strauss's choral writing.