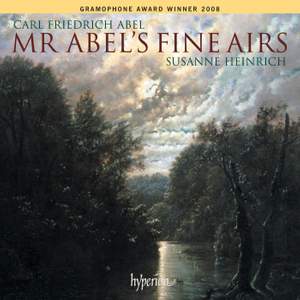 Susanne Heinrich rises ably to the challenge of understanding this 18th-century Jekyll-and-Hyde figure, heightening to fine effect the music's light and shade, energy and indolence. Her readings... — BBC Music Magazine, February 2008, 4 out of 5 stars More…

Carl Friedrich Abel (1723–1787) was a contemporary of J C Bach, and a fashionable performer and promoter in London in the eighteenth century. By that time the viola da gamba was a rarity, but Abel’s performances sparked a revival of interest among performers and audiences. The works recorded on this disc (six of which have never been previously recorded) can be seen as musical expositions of sensibility, inhabiting the same tragic world as the gamba solos in J S Bach’s Passions. Abel’s contemporary Charles Burney commented on the musician’s ability to ‘breathe’ the notes as he played them, and this extraordinary sensitivity is present too in the beautiful playing of Susanne Heinrich.

Susanne Heinrich rises ably to the challenge of understanding this 18th-century Jekyll-and-Hyde figure, heightening to fine effect the music's light and shade, energy and indolence. Her readings are effortlessly poised and imbued with an almost vocal lyricism...

Abel’s pieces are reminiscent of J S Bach’s solo cello suites, so if you like them then you’ll like these...Sensibility, or the practise of articulating direct and strong emotions, was all the rage in the arts world at the time, and Suzanne Heinrich beautifully draws this out of Abel’s writing.

Carl Friedrich Abel is usually thought of as a genial symphonist much in the mould of his London concert-promoting business partner JC Bach, but this delightful release shows that anyone considering on that basis not to delve further into Abel's output is missing not only an important side of the man, but indeed his very core. Abel was one of the last masters of the viola da gamba, and in these unaccompanied pieces he reveals an intimate art which instantly makes sense of the affection and reverence in which he was held by his friends, they being the ones who got to hear him improvising at home in front of the fire and left touching accounts of his power to stir their emotions. 'He was the Sterne of music' is how one described him, which is saying something.
Susanne Heinrich has chosen 24 solo gamba pieces from the 30 contained in a manuscript in the New York Public Library which surely represent the kind of music Abel played in those domestic musical occasions. Unencumbered by showy virtuosity, they are never less than supremely elegant, yet at their best exhibit profound sentiment in the word's exquisite 18thcentury sense. Four of the pieces are grouped together to make a sonata, but the others are free-standing and range from deeply felt adagios to lightly arpeggiated preludes, and from suave minuets to the occasional faintly rustic dance. Heinrich brings to them exactly the right blend of emotional involvement and earnest good taste, and finds pleasing resonance and smoothness in her instrument, such that even nearly 80 minutes of solo gamba never tires the ear. An unsuspected and atmospheric gem.

The first time I put this disc in my player, I  wasn’t in the mood. I  tried again a few days later and was absolutely entranced. Carl Friedrich Abel was a pupil of Bach’s and the influence shows, but the younger composer’s own breadth of invention is breathtaking. As are the dark, velvety colours that viola da gamba player Susanne Heinrich finds in his long lines. A  really special album, this.

Heinrich brings… exactly the right blend of emotional involvement and earnest good taste, and find pleasing resonance and smoothness in her instrument… An unsuspected and atmospheric gem…

Until the release of this new recording the fascinating world of Abel’s gamba music has been pretty much a closed book … Abel inclined towards simplicity and elegance, and Heinrich is always at pains to bring out the singing quality of the melodic lines … from the outset Heinrich confidently
masters the multiple stopping and the wide range of the music … throughout, Heinrich succeeds triumphantly in crafting each piece individually— creating a special atmosphere for each work