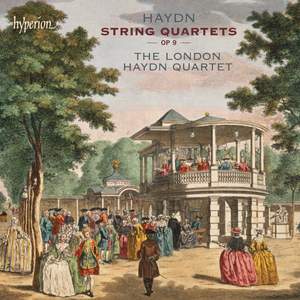 Without a doubt one of the all-time great Haydn quartet recordings … the original instrument London Haydn Quartet play Op 9 with such deep feeling, dynamic subtlety and phrasal sensitivity that... — Classic FM Magazine More…

Haydn’s Op 9 quartets are commonly seen as his first ‘mature’ set, written during the period when he emerged as an indisputably great composer. They have an amplitude, a seriousness of intent and an increasing mastery of rhetoric and thematic development that are a world away from his earlier works. They demonstrate the dazzling inventiveness and sense of symphonic structure which characterize Haydn’s greatest works.

The London Haydn Quartet perform on gut strings with classical bows, and have returned to eighteenth-century editions of the quartets, allowing them the greatest variety of interpretative possibilities.

Without a doubt one of the all-time great Haydn quartet recordings … the original instrument London Haydn Quartet play Op 9 with such deep feeling, dynamic subtlety and phrasal sensitivity that even the simplest of ideas become things of wonder. Passages of generic cadencing and
decoration that often pass by unacknowledged by other ensembles sound utterly magical here, the enhanced expressive flexibility of gut strings revelled in to the full

Initially I thought the playing, with its abstemious use of vibrato and limited dynamic range, slightly austere. But I quickly warmed to the pure, glowing sound of gut strings played perfectly in tune, and to the ensemble's delicacy of nuance and sensitivity to harmonic colour, treating the listener as a privileged eavesdropper.

A sonority that seems brighter and less astringent than that produced by ‘period’ ensembles, but one that is still far closer to what we assume to be the timbre of an eighteenth-century quartet … Hyperion’s sound is ideal: close, clear and free of harshness
and any intrusive breathing. In short, this is an interesting and possibly controversial release, but one that shows The London Haydn Quartet to be thoughtful, provocative and technically accomplished