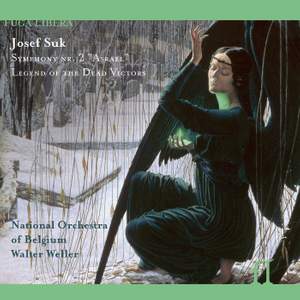 We are never in any doubt that Walter Weller feels the music deeply and has his players well-disciplined to give their all. His tempos are well-chosen...It is, in one sense, the most intimate... — BBC Music Magazine, May 2010, More…

Suk: Legend of the Dead Victors, Commemoration for Great Orchestra, Op. 35B

Josef Suk's 'Asrael' Symphony, of a dimension worthy of Mahler, written a century ago by a man crucified by pain, is slowly finding its way into the limelight.After memorable recordings by Talich, Pesek and more recently Vladimir Ashkenazy, Walter Weller with the Belgian National Orchestra, leads us into an intimate reading of this work, written after the deaths of Suk's father-in-law, Dvorak and his young wife, Otilie.

Asraël (Angel of Death) is a unique reflection upon death, where sadness, anger, resignation and the overcoming of pain form an extraordinary storyline, a combination of intimacy and remarkable fullness of sound. Rarely recorded, the work that completes this programme will be of interest to all fans of Czech music and of works inspired by the war: Legend of the Dead Victors is Suk's tribute to the Czech soldiers who died during World War I; an extraordinary short piece suggesting another vision of how to overcome death. Walter Weller is regularly invited as guest conductor throughout the world and has held a number of prestigious titles with orchestras including the Royal Scottish National Orchestra, Royal Liverpool and Royal Philharmonic Orchestras. Since the 2007/08 season, he has held the post of Music Director to the National Orchestra of Belgium and has toured to Spain in addition to concerts in Amsterdam and Rotterdam. In Scotland,Walter Weller has the special distinction of being pictured on the £50-note.

We are never in any doubt that Walter Weller feels the music deeply and has his players well-disciplined to give their all. His tempos are well-chosen...It is, in one sense, the most intimate performance of Asrael currently available, and one that stresses the work's Mahlerian affinities to an unusual degree.