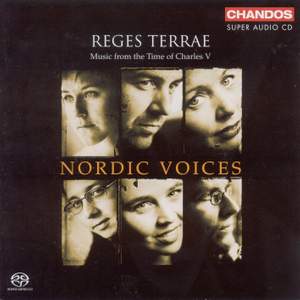 Music from the Time of Emperor Charles V

Nordic Voices' mixed six-voice configuration (two sopranos, one each of mezzo, tenor, baritone and bass) is beautifully suited to the music in this programme, and their clear, radiant performances,... — BBC Music Magazine, October 2007, 4 out of 5 stars More…

During the first half of the sixteenth century, there was no greater a ruler than the Emperor Charles V, whose court was lavishly supplied with music by composers of high talent. Charles had a personal enthusiasm for music, and his chapel was more or less in constant attendance on his travels. It is small wonder, then, that a number of the greatest composers of the age had some connection with him, including the Franco-Flemish composers Manchicourt, Cristóbal de Morales and Nicolas Gombert. Complementing these composers are the perhaps less well-known Guerrero and Jacobus Clemens non Papa. As members of the chapel choir of Charles V, most of these composers travelled the Empire widely, and were praised as among the outstanding masters of their time. Only Francisco Guerrero worked exclusively in Spain. To us the least well known of the Spanish composers of the period, and consequently the most underrated, he was the most admired Spanish musician of the second half of the sixteenth century, known for his Latin liturgical works. Manchicourt composed some of the most glorious music of the time, this CD including the well-known early motet O Virgo virginum along with the premiere recording of the Agnus Dei from the Missa Reges terrae. De Morales is widely recognised as the most important figure in early sixteenth-century Spanish music, garnering frequent praise from his contemporaries and ranking with Palestrina in his mastery of polyphony. Nordic Voices here present two of his sumptuous and richly varied motets.

Nordic Voices' mixed six-voice configuration (two sopranos, one each of mezzo, tenor, baritone and bass) is beautifully suited to the music in this programme, and their clear, radiant performances, full of character, are vividly captured by the DSD recording on this hybrid disc. The ensemble sound is intimate and close yet individual voices exhibit an airiness and spaciousness.