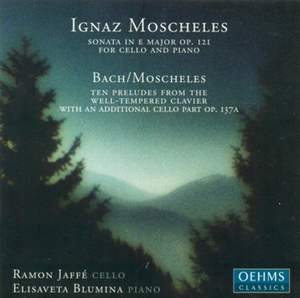 Ignaz Moscheles, born in 1794 in Prague, was highly regarded by Robert Schumann. His fame during his lifetime was due primarily to his career as a piano virtuoso, and the piano always takes an important role in his compositions. His musical thinking was highly influenced by Bach and Handel. His veneration of Bach can be heard in his transcriptions of ten of Bach’s preludes from the Well-Tempered Clavier, for cello and piano. In the second movement of his major Sonata for cello, op. 121, we hear the sound of folk music from Moscheles’ Bohemian homeland.