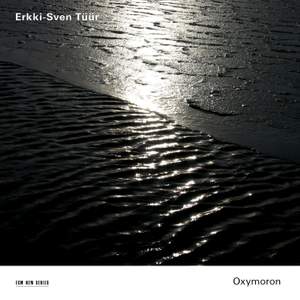 This enjoyable programme of works by Erkki-Sven Tüür… helps to confirm this young(ish) Estonian composer as an important contemporary voice. The performances all seem to be of the highest quality,... — BBC Music Magazine, September 2007, 5 out of 5 stars More…

Oxymoron - contradictory terms in conjunction - seems to be a perfectly appropriate title for a CD presenting four pieces written between 1991 and 2005 by Estonian composer Erkki-Sven Tüür for different vocal and instrumental line-ups. "Salve Regina" is one of a burgeoning number of pieces of a religious nature that Tüür has written recently; the earliest piece here is the short "Dedication" for cello and piano. The central work, "Ardor", is a 25-minute concerto for that rather neglected instrument, the marimba, while the large ensemble piece that gives the album its title, "Oxymoron", was inspired by the Alps. Tüür's writing is characterized by juxtapositions of seemingly heterogeneous musical idioms always moulded with a rare sense of architecture and musical dramaturgy. Oxymoron is the fourth ECM release dedicated exclusively to his music. It follows 'Exodus' which featured the CBSO conducted by Paavo Järvi in three major orchestral works. These included the Violin Concerto, performed by Isabelle van Keulen, which she also played to great acclaim at the 2003 BBC Proms. Personnel: Vox Clamantis, NYYD Ensemble, Pedro Carneiro (marimba), Estonian National Symphony Orchestra, Olari Elts (conductor), Leho Karin (cello), Marrit Gerretz Traksmann (piano)

This enjoyable programme of works by Erkki-Sven Tüür… helps to confirm this young(ish) Estonian composer as an important contemporary voice. The performances all seem to be of the highest quality, and two artists deserve special mention: Pedro Carneiro for his almost unbelievable feats of prestidigitation as marimba soloist in Ardor, and Leho Karin for the sustained intensity she brings to the volatile and high contrasted expressive range of Dedication. Fans of Tüür (a growing band, I fancy) need not hesitate.

For some years now Erkki-Sven Tüür has been routinely described as the leading Estonian composer. With this disc he not only justifies that label but lays claim to wider recognition... The rewards are great. This is music that is exhilaratingly open to experience.