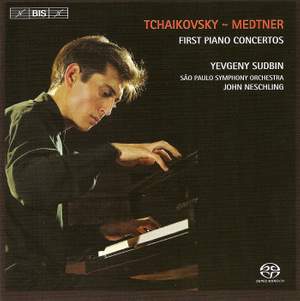 His stunning virtuosity and the sensitive interaction with the conductor and orchestra really does the talking. — BBC Music Magazine, January 2008 More…

His stunning virtuosity and the sensitive interaction with the conductor and orchestra really does the talking.

To describe 26-year-old Yevgeny Sudbin as music's brightest young star pianist is in a sense to do him a disservice. For he is above all an artist, and here in his eagerly awaited concerto debut on disc he gives us a Tchaikovsky First of spine-tingling brilliance, poetry and vivacity. This is never the Tchaikovsky you have always known, but an arrestingly novel rethink with the concentration on mercurial changes of mood and direction.
Here, amazingly, is one of the most familiar of all concertos rekindled in all its first glory, brimming over with zest and shorn of all the clichés that have adhered to it over the years.
In the first movement Sudbin's octaves ring out like a giant carillon, while the Andantino's central prestissimo becomes in such extraordinary hands a true firefly scherzo. Not even Cherkassky at his finest possesed a more elfin sense of difference or caprice. And to think that all this and more is accomplished without the lift, or hindrance, of a major competition success.
Medtner's massive First Concerto, too, could hardly be played with a more burning clarity and commitment. Medtner's music remains formidably inaccessible, despite displaying the outward trappings of Romantic rhetoric yet Sudbin clearly believes in every note and his playing evinces, as on live occasions, a rare sense of affection. Such poetry is confirmed in his encore, his own transcription of Medtner's song Liebliches Kind! It only remains to add that BIS's balance and sound are of demonstration quality and that the São Paulo SO under John Neschling sound as if influenced by neighbouring Rio's carnival spirit, so infectiously do they respond to their radiant soloist.

Yevgeny Sudbin's performance here fairly explodes with imagination, feeling and desire. Here, one feels, is a pianist hungry to test himself intellectually and emotionally as well as technically