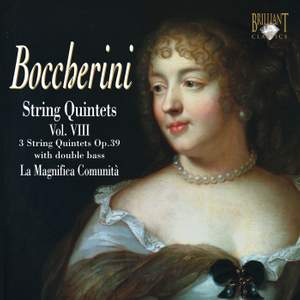 Luigi Boccherini (1743–1805) is one of the major figures in 18th century music, and was close to both Haydn and Mozart. The young Austrian admired Boccherini’s music, and his string quintets in particular. Throughout his long career, Boccherini’s style was influenced by composers such as Nardini, Sammartini in his native Italy, Wagenseil and Monn from the Mannheim school, and forward looking composers from France such as Gossec. However, Boccherini was to base himself in Spain at the royal court, and found himself rather cut off from mainstream European musical trends. This caused him to develop his individual style – a mix of Spanish dance influences, and a smooth ‘Latin’ charm that led some commentators to remark that his music was effeminate, and in the words of one violinist Giuseppe Puppo, that he was ‘Haydn’s wife’. This is to miss the point of Boccherini’s style.

Although less dramatic than either Haydn or Mozart, his music does have moments of explosive drama that appear all the more effective when bursting fortissimo from an otherwise calm movement. The harmonic shifts are also surprising and used to great effect. His music is sensuous, passionate and dramatic. The Op.39 Quintets date from 1787 when he was at the court of Friederich Wilhelm II in Berlin. These are important works that rank alongside the chamber music of his great Austrian contemporaries, and Boccherini deserves to be in their company.