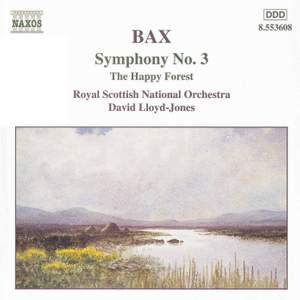 Bax: Symphony No. 3 & The Happy Forest

Lloyd-Jones "keeps his lines defined in the vital slow music of I and the Lento, clarifying textures while probing, molding, and shaping phrases to produce an ebb and flow. In doing so, he draws... — American Record Guide More…

Lloyd-Jones "keeps his lines defined in the vital slow music of I and the Lento, clarifying textures while probing, molding, and shaping phrases to produce an ebb and flow. In doing so, he draws a link to Elgar by revealing the same nooks and crannies that make up Elgar's melodic lines?ust as wisely, Lloyd-Jones does not blur orchestral textures to create 'impressionism'. His woodwinds stand out, adding important color, energy, and briskness; the first violins are sweet and silvery, and the brass are crisp and clean. (The latter could be darker, but I'm quibbling.) Suddenly we notice the interweaving strings in the slow passage of I; the eerie spell before the muted trumpets (14:02) the shocking climax at 15:30 and the following brass fanfares, the way the trumpet solo in the Lento breathes rather than is just slow, etc.

Dedicated to Sir Henry Wood, Bax's Symphony No 3 boasts arguably the richest store of memorable melodic invention to be found in any of the composer's cycle of seven, culminating in an inspired epilogue of wondrous, jaw-dropping beauty. David Lloyd-Jones's clear-headed, purposeful conducting of this intoxicating repertoire is the most judiciously paced and satisfyingly cogent Bax Third we've had since Barbirolli's pioneering 1943-4 Hallé account.
Moreover, not only does Lloyd-Jones keep a firm hand on the tiller, he also draws some enthusiastic playing from the RSNO, which responds throughout with commendable polish and keen application.
Finely poised, affectingly full-throated solo work from principal horn and trumpet illuminates the progress of the ensuing Lento, whose ravishing landscape Lloyd-Jones surveys in less lingering fashion than either Barbirolli or Thomson. The first half of the finale, too, is a great success, Lloyd-Jones negotiating the fiendish twists and turns dictated by Bax's copious tempo markings with impressive aplomb.
Only in the epilogue do you feel a need for a touch more rapt poetry. Tim Handley's excellently balanced recording is rich and refined, though the perspective is perhaps fractionally closer than ideal for The Happy Forest, which receives a performance of bounding vigour, gleeful mischief and muscular fibre; just that last, crucial drop of enchantment remains elusive. No matter, a disc not to be missed.