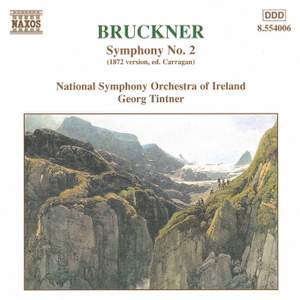 This exceptional recording by veteran Austrian conductor Georg Tintner is in a league of its own. It's a beautifully shaped performance, characterfully played and vividly recorded.
What's more,... — Gramophone Classical Music Guide, 2010 More…

This exceptional recording by veteran Austrian conductor Georg Tintner is in a league of its own. It's a beautifully shaped performance, characterfully played and vividly recorded.
What's more, it's, in effect, a gramophone 'first', for though the original, 1872 version of Bruckner's Second Symphony has been recorded elsewhere this is the first to reach a wider market.
Not that the differences between editions are hugely significant. What the earlier 1872 version principally offers is the reversal of the order of the two inner movements (the Scherzo now comes before the Andante), a full clutch of repeats in the Scherzo and Trio, a rather longer development section in the finale, various small changes to the orchestration and the absence of some of the more meretricious tempo markings.
What's appealing about the 'full monty' is the feeling it gives of the symphony's Schubertian pedigree: heavenly length joining hands with a deep sense of melancholy and melodic Angst.
Which brings us to Tintner's reading of the symphony, which is shrewd and affectionate, tellingly phrased and beautifully paced, the moves away from and back to the basic pulse nicely handled. This is Bruckner conducting of the old school. There's also something reassuringly old-fashioned about the playing of the National Symphony Orchestra of Ireland. The entire orchestra has the character of a well-to-do country cousin who's blessedly innocent of the more tiresome aspects of metropolitan life. This is an exceptional recording.