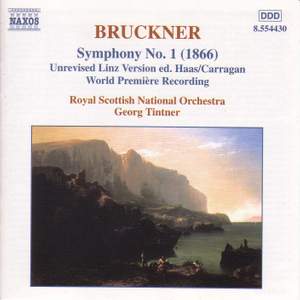 Some of the outstanding performances in the late Georg Tintner's Naxos Bruckner series have been of the early symphonies. 'Your young men shall see visions,' says the Prophet Joel. It has been... — Gramophone Classical Music Guide, 2010 More…

Some of the outstanding performances in the late Georg Tintner's Naxos Bruckner series have been of the early symphonies. 'Your young men shall see visions,' says the Prophet Joel. It has been Tintner's skill to conjure vision by marrying sharpness of detail and youthful diction with a daring breadth of utterance. He did this in his recording of the Symphony No 3 and he does it again here in a fine account of the First recorded in Glasgow's Henry Wood Hall with the RSNO at the top of its considerable form.
Timings of individual movements confirm a broad reading, as broad as Václav Neumann's on his old Leipzig set. But where Neumann's performance ended up sounding soulful and ponderous, Tintner's is as fresh as could be. Bruckner called this a 'cheeky little minx' of a symphony. Tintner shows it to be that, and more. (Bruckner's own generally unavailing pursuit of cheeky post-pubescent minxes clearly fed a rich and lively fantasy life which the symphony vividly charts. Or so Freudians might have us believe.) The announcement that this is the 'world premiere recording' of the 'unrevised Linz version' shouldn't cause seasoned collectors to throw out cherished extant recordings of the 1866 'Linz' (as opposed to 1890-91 'Vienna') version. The emendations Bruckner made in 1877 to the 1866 text are fairly minor. That said, future interpreters may want to follow Tintner in using this plainer Haas/Carragan edition rather than the 1955 Nowak edition which, in typically meddling style, incorporates the 1877 changes into the original text. The plainness of the orchestration at the very end of the symphony is absolutely right for a peroration that's both prompt and ingenious.
The fill-up is rather more intriguing textually.
It's the largely forgotten 1876 revision of the original 1873 version of the Adagio of the Third Symphony. The changes include a quicker tempo, a gentle elaboration of the violin figurations near the start, and a disastrous attempt to underpin the lead to the final climax with a new Tannhäuser-like violin accompaniment. Since this is funny in the wrong way, it could be said nicely to complement the main work on the disc which is funny (and fun) in all the right ways.

This is the last of Georg Tintner's Bruckner recordings for Naxos, and it's one of the best. In fact, there isn't anything in this performance that Tintner does wrong...so effortless is Tintner's command of Bruckner's sense of scale and pacing. The recent, tragic death of this fine artist was a loss to music lovers everywhere, but in consistently fulfilling the very special promise of his Bruckner recordings for Naxos, he has left us an enduring musical testament that will keep his memory and work alive for generations. And that is cause for celebration, which I am sure is how Tintner himself would have wanted it. Listen, and enjoy!