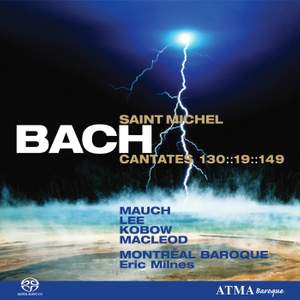 Cantatas for the Feast of Saint Michael

Even by Bach’s standards, they are exceptional. All three of them were conceived as grateful celebrations of the ancient feastday of the Archangel Michael . St Michael’s day commemorates the apocalyptic combat and eventual victory of Michael and the angels of Heaven against the armies of Satan. All three of these cantatas are set for a festive orchestra with strings plus three trumpets, drums, and other luxuries (an extra third hautboy, a traverso in Cantata 130, and hautboys doubling on hautbois d’amour or playing oboe da caccia in Cantata 19). A mood of joyful serenity permeates all three cantatas. Cantata 130 contains one of Bach’s best character arias (about the old dragon). The opening of Cantata 19 is one of the most extravagant epics in the cantatas, and the same cantata contains a love aria (to an angel) that is exceedingly seductive. Cantata 149 includes two fascinating solos for bassoon.