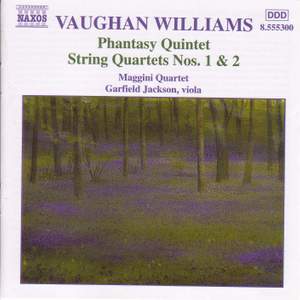 Why isn't Vaughan Williams's Second Quartet part of the international chamber repertory? Played as eloquently as this it seems unarguably a masterpiece, one specifically of its time: 1942-3.... — Gramophone Classical Music Guide, 2010 More…

Vaughan Williams: String Quartet No. 2 in A minor

Why isn't Vaughan Williams's Second Quartet part of the international chamber repertory? Played as eloquently as this it seems unarguably a masterpiece, one specifically of its time: 1942-3. Its first movement and deeply fraught Scherzo are as troubled as Shostakovich (whose music at moments, like a sudden stab of violence in that first allegro, it passingly resembles), while the misleadingly titled slow 'Romance' is haunted and haunting. It's tranquil but not at peace. It achieves an impassioned nobility and approaches serenity at the end, but something ghostly (it walks again in the Epilogue to the Sixth Symphony) refuses to be exorcised until the beautiful calm finale.
What these players do with the two much earlier pieces is no less remarkable. In them Vaughan Williams's style is audibly emerging from the influences (notably Ravel, briefly his teacher) that helped form it. In the First Quartet's opening movement an arching, lyrical melody that sounds like Vaughan Williams speaking with a French accent (and is it a French lark that ascends a little later?) has shed the accent by its return; something similar happens in the finale. But it was not an immature composer (he was 36, after all) who in the slow movement recognised a kinship with Fauré. And the Phantasy Quintet is audibly by the composer of the Tallis Fantasia, grateful to Ravel for giving him access to a deft rhythmic flexibility, but exploring his own unmistakable territory in the serenity tinged with poignancy of the slow movement. The Magginis and Garfield Jackson clearly love this music deeply; they play it with great beauty of tone and variety of colour and with passionate expressiveness.
The ample recording allows both grand gestures and quiet intimacy.

Vaughan Williams' chamber music forms only a tiny proportion of his output, but what little there is displays his characteristic style...Indeed, many of his chamber works seem to be symphonies in miniature, inhabiting the same sound-world. The Maggini Quartet offer a delightful taste of this little-known side of the composer.