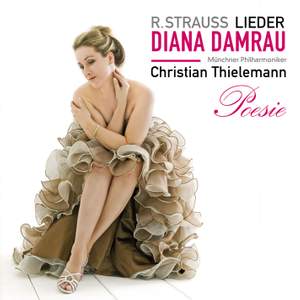 What wins this disc the five stars are the facts that Damrau, singing in her native German, is poised ideally between dreamy haze and Schwarzkopfian fussiness...her hallowed pianissimos allow... — BBC Music Magazine, February 2011, 5 out of 5 stars More…

“This is a performance of transcendent art” proclaimed Opera News on hearing Diana Damrau’s interpretation of Strauss’ Zerbinetta on her last Virgin Classics album, ‘Coloraturas’. In this collection of Strauss songs, recorded in the composer’s hometown, she is joined by the Munich Philharmonic and Christian Thielemann, the leading German conductor of his generation.

Soprano Diana Damrau, described by The Sunday Times as “the most dazzling star to have emerged from Germany in recent years” was born in Bavaria. The region’s capital, Munich, was the birthplace of Richard Strauss, and in March 2009 a programme of the composer’s songs was presented at the city’s Gasteig Philharmonie, with Damrau accompanied by the Munich Philharmonic Orchestra under its Chief Conductor, Christian Thielemann.

“Strauss loved female voices,” says Damrau, “and he explores some extreme possibilities in these many-layered songs, each with its different point of view. Sensitivity to the words is vital to telling the story of each song, to capturing the rapid changes of mood and all the colours.”

Strauss’ operatic roles for lyric-coloratura soprano, notably Zerbinetta (Ariadne auf Naxos), Aithra (Die Aegyptische Helena) and Sophie (Der Rosenkavalier) have played an important role in Damrau’s career. As Opera News wrote when reviewing her last Virgin Classics album, ‘Coloraturas’: “Zerbinetta … is one of Damrau's calling cards, having served for her stupendous Met debut in 2005. ‘Grossmächtige Prinzessin’ provides every opportunity to dazzle the listener, with stratospheric high notes, staccatos, roulades and trills, as Zerbinetta cajoles, berates and mocks the gloomy Ariadne. Every note and word reveals Damrau's artistry, the result of constantly questioning and probing into the composer's intentions; while the soprano has a knack for concealing or highlighting technical difficulties at will, here just enough self-absorbed delight breaks to the surface that we are as captivated by Zerbinetta's own theatrical skills as by Damrau's vocal athleticism. Damrau/Zerbinetta even seems to be commanding the orchestra's responses to her whimsical, moody outbursts. This is a performance of transcendent art.”

What wins this disc the five stars are the facts that Damrau, singing in her native German, is poised ideally between dreamy haze and Schwarzkopfian fussiness...her hallowed pianissimos allow the exquisite detail Thielemann draws from his Munich players to shine...the ineffable balance between voice and orchestra, subtly assisted by the engineering, is a treat throughout.

These songs demand a variety of vocal weights and colours, and Damrau seems to have it all...Thielemann and the Munich Phil revel in the rich orchestral colours and can be as light as air when required...Damrau brings effortless technique, beautiful tone and unfailing musical instinct to these songs.

When did a German coloratura soprano last handle Richard Strauss’s orchestral songs with such grace and aplomb?...Damrau’s artistry is a combination of vocal noblesse, emotional warmth and instinctive intelligence.

she is not merely a fair-weather soprano. Darker shades, more serious tones lie within her expressive scope than one might at first suppose...Familiar songs such as "Ständchen" gain new life with a smiling intimacy of approach in the first verse and an enriched suggestiveness as dusk falls in the third.

Always there is delicacy and an absolute respect for the silky legato that Strauss demands from his soloist. Damrau finds drama in these songs too...the songs that demand diamond-bright coloratura, runs and trills to affright a Zerbinetta hold no terrors...Thielemann has a very special affinity with singers. He also coaxes some fine playing from the Munich orchestra.

She has a formidable technique and hits the high notes with pinpoint accuracy. Her dynamic range is equally impressive and in particular her quiet pianissimos allow Strauss’s wonderful orchestration to make telling contributions. She also has a richness and warmth to her tone which gives these songs the necessary sensual and emotional effect.

Her singing is consistently accurate and expressive. I particularly liked her 'Traum durch die Dämmerung', which caught the atmosphere of a secret tryst perfectly...She joins the group of younger sopranos such as Angelika Kirchschlager and Anne Schwanewilms among the leading lyric Strauss singers of the day.

With a creamy-voiced soprano such as Renée Fleming, say, the results could be an excess of musical cholesterol, but Damrau’s diamantine timbre brings a welcome edge to the mix...She’s the leading Strauss soprano of the day, and her singing here shows exactly why.

there are performances of such favourites as Morgen, Allerseelen and Wiegenlied, where her hovering, silvery soprano is heard to perfection...Not all the orchestrations are by Strauss: Christian Thielemann and the Munich Philharmonic really bring home just how marvellous his own instrumentation sounds when placed beside that of some of the other composers

This gloriously romantic collection of orchestral settings of Strauss’s songs... shows [Damrau] at her stunning best. Outstanding tracks include Amor, with its airy, witty coloratura, and a magically slow yet gloriously alive Wiegenlied. The accompaniments, as might be expected from Thielemann’s baton, are quite superb.

Secure in technique, gifted in projecting drama and emotion, Damrau is a peach of a singer...The haunting music; the lyrical voice; the orchestra’s dappled array, with woodwinds curling like climbing roses and violins wafting with fragrant perfume: poesie indeed, in small doses.

her voice is not ideally voluptuous for Strauss, but she makes up for it by her exceptional musicality, investing every song with meaning, and her clarity of diction. The Munich Philharmonic under Christian Thielemann are splendid partners on a CD that must now be regarded as the best modern introduction to Strauss's songs