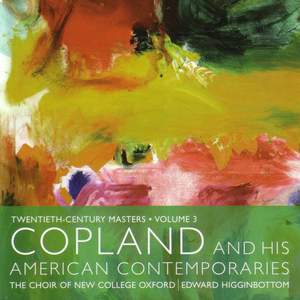 Hailstork: The Song of Deborah

Copland: In the Beginning

Larsen, L: I will sing and raise a psalm

In his 30-plus years as director of The Choir of New College Oxford, Edward Higginbottom has secured its legacy through hundreds of critically acclaimed and best selling recordings, the most recent being the final instalment in a trilogy exploring various national choral traditions of the 20th century. Following the success of Poulenc and his French Contemporaries (AV 2084) and MacMillan and his British Contemporaries (AV 2085), Higginbottom turns to the American School, offering seminal works by native composers - such as Copland’s In The Beginning, Ives’ 67th Psalm and Morten Lauridsen’s modern classic O Magnum Mysterium – alongside those written in or inspired by the big country, including Stravinksy’s Mass and Tippett’s gospel-tinged Steal Away.