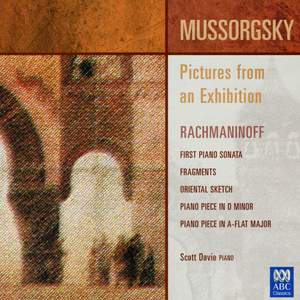 Mussorgsky: Pictures From an Exhibition

Excerpt,  Mussorgsky: Pictures at an Exhibition

Ballet Of The Chickens In Their Shells

The Market Place At Limoges

The Hut On Fowls Legs

The Great Gate Of Kiev

One of the most famous works in the classical music repertoire, Pictures from an Exhibition first came to prominence not in its original form but as an orchestration by Ravel.

This recording features the original epic piano work with five works by Rachmaninov, including the world premiere recording of the Piano Piece in A flat major, which was discovered by Scott Davie in the Library of Congress, Washington.