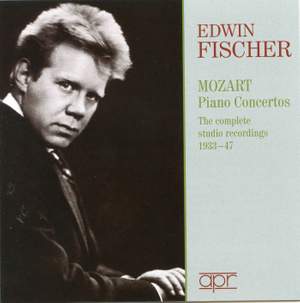 ...you will hear a delectably light-fingered virtuosity...combined with a poetic commitment rare in today's chaotic musical marketplace...APR's transfers are admirable and all three discs are... — Gramophone Magazine, July 2010 More…

Along with Schnabel, in the first half of the 20th century Edwin Fischer was generally regarded as the greatest interpreter of the Germanic classics - Bach, Mozart, Beethoven, Schubert and Brahms. This was the period when recording came of age, and many first recorded performances, regarded as definitive in their time and still thought amongst the greatest even today, were set down by Fischer. Supreme among them were the first complete recording of Bach’s Well-Tempered Clavier and the Mozart concertos presented here. These are the only Mozart concerto recordings Fischer was to make commercially except for a LP remake of the D minor in 1954. Their status is such that they should never be out of the catalogue, and we are delighted therefore to reissue these APR transfers (previously on APR5523, 5524 & 5525) as a budget priced 3CD set. Also included are most of Fisher’s solo recordings of Mozart and his only recording of a Haydn concerto.

...you will hear a delectably light-fingered virtuosity...combined with a poetic commitment rare in today's chaotic musical marketplace...APR's transfers are admirable and all three discs are a mine of musical instruction and delight.