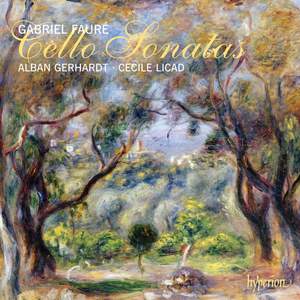 One has a powerful sense of Cecile Licad and Alban Gerhardt's compelling grasp of architecture...[in the Andante of No. 1] Licad's melting lines are wonderfully voiced, and we have a choice of... — BBC Music Magazine, March 2012, 4 out of 5 stars More…

Following their triumphant Casals Encores disc, Alban Gerhardt and Cecile Licad are reunited for Fauré’s music for cello and piano. The two cello sonatas are among the masterpieces of the cello repertoire, looking back to the nineteenth century but also with an edginess that may well reflect the time in which they were written—during and immediately after the First World War. Remarkably, Fauré was in his seventies by the time he wrote them. There’s some debate as to how fast the last movement of the first sonata should go—so Alban Gerhardt has recorded two alternative versions, to be programmed to the listener’s taste.

Alongside the sonatas are some of Fauré’s most seductive bon-bons, including the famous Sicilienne and Élégie, and the so-called Papillon (so-named at his publisher’s insistence and much to Fauré’s annoyance—he hated fluffy titles).

Alban Gerhardt is of course a Hyperion regular and this is his ninth album for the label.

One has a powerful sense of Cecile Licad and Alban Gerhardt's compelling grasp of architecture...[in the Andante of No. 1] Licad's melting lines are wonderfully voiced, and we have a choice of finales - one at Faure's own controversially slow tempo, and one at the performer's preferred, faster tempo. In the Second Sonata, Gerhardt captures the first movement's exalted energy.

[Gerhardt] has the command of a very fine virtuoso...[Gerhardt and Licad] sound free as air, intellectually confident, full of verve, with niceties of balance and intensities never an issue; a convincing frame of colour, movement and sound in place for every movement...obviously the one to get. May it win friends for some excellent and still undervalued music.

From every standpoint, Gerhardt's accounts of the sonatas seem exceptional, with their assured technical mastery and uncanny depth of insight...none of [the] rival accounts will readily eclipse these sonorously authoritative new performances...Magnificent cello playing from Gerhardt, empathetically supportive accompaniments from Licad and a wonderfully natural and atmospheric recording to boot.

Alban Gerhardt's account of Fauré's two cello sonatas, both late works, repay careful listening. Like the works themselves, his playing and that of the pianist Cecile Licad is full of subtleties, the half-tones and inflections that make the chamber music of Fauré's final decade so elusive and fragile. Nothing here is forced or made to conform

They make a particularly fine duo here, working emotionally in unison, sensing the music’s contours with like mind, breathing as one...their feeling for moments of drama and repose is held in ideal equilibrium, and their pointing up of Fauré’s individual harmonic shading is judged instinctively.