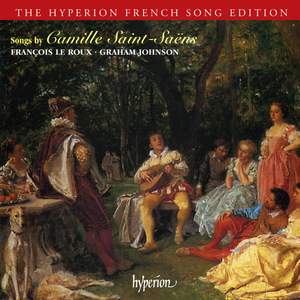 This is the most resounding blow yet to be struck for the mélodies of Saint-Saëns. François Le Roux, with his incisive diction and ability to characterise each song, is a real champion for the... — Gramophone Classical Music Guide, 2010 More…

James explores the music of French composer Camille Saint-Saëns and chooses some of his favourite recordings.

This issue in our French Song Edition is a single disc devoted to the songs of Camille Saint-Saens, the composer of Carnival of the Animals, Danse Macabre and Samson and Dalila. During his long life (he lived to the age of eighty-six) he wrote a surprisingly large number of songs, few of which are well known. Here are twenty-seven of them. Saint-Saens drew his texts from a wide variety of sources, old and new, including the greatest French writers of his time Victor Hugo particularly. But, as Graham Johnson wittily says in his notes to the disc, 'they were all grist to Camille'.

This is the most resounding blow yet to be struck for the mélodies of Saint-Saëns. François Le Roux, with his incisive diction and ability to characterise each song, is a real champion for the man, once so successful, who became, as Graham Johnson puts it in the booklet, 'a footnote' rather than a chapter in the history of French music.
Many of the poems that Saint-Saëns set were used by other composers, for instance Dans toncoeur, which became Duparc's Chanson triste, by 'Jean Lahor' (Henri Cazalis). The first song of the Mélodies persanes, 'La brise', is full of eastern promise, the second, 'Sabre en main' a rollicking bit of toy-soldier galloping away, but just as you're beginning to think that Johnson is shooting himself in the foot by being so ironic about the music they're performing comes the hauntingly beautiful fifth song, 'Au cimetière', with its quietly rippling accompaniment and the languorous poem about the lovers sitting on a marble tomb and picking the flowers. Le Roux sings this with controlled, quiet intensity.
Johnson makes the point that it's of little importance from which part of the composer's life the songs come, he embodies that totally French 19th-century style, sometimes anticipating Hahn and Massenet, sometimes harking back to Boieldieu. If a setting of La Fontaine's fable about the cicada and the ant is pure salon charm, then the final 'Grasselette et Maigrelette' Ronsard chanson, composed when Saint- Saëns was 85 in 1920, is a vivacious café-concertstyle evocation of old Paris.

Saint-Saëns wrote quite a large number of songs, and this disc of twenty-seven of them is a real treat. Graham Johnson accompanies French baritone François Le Roux, and having a native speaker really helps, as his engagement with the text is really superb, from the tender lyricism of Dans ton cœur and Rêverie to the twisted waltz of the vocal version of Danse macabre.