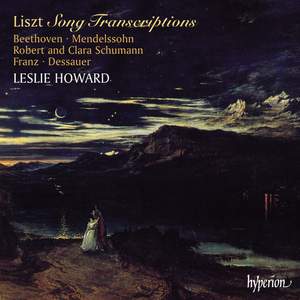 II. Wo die Berge so blau

I. Schilflieder, Op 2. No 4. Sonnenuntergang

VII. An die Türen will ich schleichen, Op 98a No 4

Few composers have ever shown a more insatiable interest in the music of others than Liszt, or devoted more time to transcribing it for the piano. Here Howard plays 60 of Liszt's 100 or so song transcriptions, including several by the lesser-known Dessauer, Franz and (as composers) Anton Rubinstein and Clara Schumann, alongside Beethoven, Mendelssohn and Robert Schumann.
The selection at once reveals Liszt's variety of approach as a transcriber no less than his unpredictability of choice. Sometimes, as most notably in Beethoven's concert aria, Adelaïde, the keyboard virtuoso takes over: he links its two sections with a concerto-like cadenza as well as carrying bravura into an amplified coda. But after the dazzling pyrotechnics of many of his operatic arrangements, the surprise is the self-effacing simplicity of so much included here.
The five songs from Schumann's Liederalbumfür die Jugend are literal enough to be played by young children. Even his later (1880) fantasytype transcriptions of Rubinstein's exotic TheAsra has the same potent economy of means.
Howard responds keenly to mood and atmosphere, and never fails, pianistically, to emphasise the 'singer' in each song – in response to the actual verbal text that Liszt was nearly always conscientious enough to write into his scores.
The recording is clean and true.