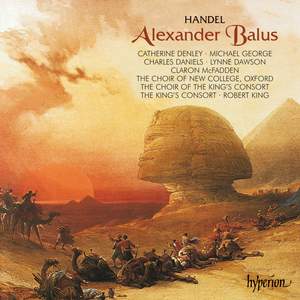 Alexander Balus has never been one of Handel's more popular oratorios. That's mainly because its plot is by modern standards lacking in drama and motivation, and accordingly doesn't call forth... — Gramophone Classical Music Guide, 2010 More…

Act 1 Scene 1 No 07. Recitative. Congratulation to our father's friend (Cleopatra)

Act 1 Scene 1 No 09. Recitative. Be it my chief ambition there to rise (Alexander)

Act 1 Scene 3 No 2. Recitative. Aspasia, I know not what to call (Cleopatra)

Act 1 Scene 3 No 3. Air. How happy should we mortals prove (Cleopatra)

Act 1 Scene 3 No 4. Recitative. Check not the pleasing accents of thy tongue (Aspasia)

Act 1 Scene 3 No 5. Air. So shall the sweet attractive smile (Aspasia)

Act 1 Scene 4 No 1. Recitative. Why hangs this heavy gloom upon the brow (Jonathan / Alexander)

Act 1 Scene 5 No 2. Air with chorus. Great God, from whom all blessings spring (Jonathan / Israelites)

Act 2 Scene 2 No 1. Recitative. Ah! whence these dire forebodings of the mind? (Cleopatra)

Act 2 Scene 2 No 2. Air. Tossed from thought to thought I rove (Cleopatra)

Act 2 Scene 2 No 3. Recitative. Give to the winds, fair princess, these vain doubts (Aspasia)

Act 2 Scene 4 No 2. Soli with chorus. Triumph Hymen in the pair

Act 3 Scene 1 No 2. Air with chorus. Here amid the shady woods (Cleopatra / Ruffians)

Act 3 Scene 2 No 1. Recitative. Ah! was it not my Cleopatra's voice? (Alexander)

Act 3 Scene 2 No 2. Air. Pow'rful guardians of all nature (Alexander)

Act 3 Scene 2 No 5. Recitative. Gods! can there be a more afflicting sight (Aspasia)

Act 3 Scene 2 No 7. Recitative. May he return with laurel'd victory (Jonathan)

Act 3 Scene 3 No 1. Recitative. Yes he was false, my daughter, false to you (Jonathan / Cleopatra)

Act 3 Scene 4 No 1. Accompagnato. Shall Cleopatra ever smile again? (Cleopatra)

Act 3 Scene 4 No 3. Air. O take me from this hateful light (Cleopatra)

Act 3 Scene 4 No 5. Accompagnato. Calm thou my soul (Cleopatra)

Act 3 Scene 4 No 6. Air. Convey me to some peaceful shore (Cleopatra)

Alexander Balus brings to completion The King's Consort's series of Handel's four 'military' oratorios (the other three being Judas Maccabaeus, The Occasional Oratorio, and Joshua). The story is a somewhat embellished retelling of chapters 10 and 11 from the first book of the Apocryphal Maccabees and involves complicated intrigues between the Jews, Syrians and Egyptians in the second century BC. To cut a long story short, Alexander Balus, King of Syria, is eventually defeated in battle by Ptolomee of Egypt and then killed by an Arab; but Ptolomee himself dies just three days later allowing Jonathan, the Chief of the Jews, to remind us of the fate of those who do not believe in the One God. Musically, Handel is at his very best in this piece. Much of the composition occurred simultaneously with that for Joshua and there is, typically, a small amount of material recycled from earlier works. The Third Act, where Cleopatra is not only told (maliciously) by her father that her beloved Alexander has been faithless, but is also then informed of his death, sees some extraordinary aria-writing, at times reminiscent of 'Dido's Lament'.

Alexander Balus has never been one of Handel's more popular oratorios. That's mainly because its plot is by modern standards lacking in drama and motivation, and accordingly doesn't call forth the vein of his music that nowadays has the strongest appeal. It's essentially a sentimental drama, in which the interest centres on the characters' emotional reactions to their situations, amatory, political and religious, and these are rather static in the first two acts but much more powerful in the more eventful third with the deaths of both Alexander and Ptolomee.
Here we have a very capable, idiomatic, sensibly cast performance under Robert King. The choruses are especially accomplished. The New College Choir, supported by men from The King's Consort Choir, is confident, brighttoned and vigorous, clean in line and well balanced.
Lynne Dawson sings beautifully in her firm and resonant soprano and her usual poised and unaffected style. Her singing of the lamenting music in the final act is particularly moving.
Cleopatra has a couple of duets, one with some attractive interplay with the secondary character Aspasia, sung with much assurance by Claron McFadden. As Alexander, Catherine Denley sings with much confidence and directness in music that isn't all of special individuality.
Jonathan is sung fluentlyand warmly, but very plainly, by Charles Daniels. Lastly there's Michael George, who's ideally suited to the villainous Ptolomee, with his forceful (but always musical) manner and the touch of blackness in his tone. The orchestral playing is accomplished, and often rather carefully shaped. The recitative moves at a steady but natural pace; ornamentation is generally modest. All Handelians will want to acquire this set, and others should not be put off by the indifferent press Alexander Balus has received from time to time.