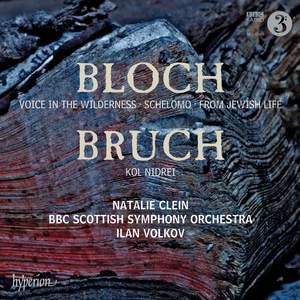 As one might expect, Clein delivers a powerfully committed performance, but also manages to avoid over-indulgence, negotiating the peaks and troughs of the music's volatile emotional language... — BBC Music Magazine, September 2012, 4 out of 5 stars More…

Bloch, E: Voice in the Wilderness

A dazzling orchestral disc of music from the Jewish tradition of the late-nineteenth and early-twentieth centuries. Bruch’s Kol Nidrei is one of the most well-loved works in the cello repertoire. The descending opening phrase of the cello line is instantly recognizable: a universal, extraordinarily expressive utterance.

The main part of the disc comprises the works for cello and orchestra by Ernest Bloch, all part of his ‘Jewish cycle’. The most famous is Schelomo, a work inspired by passages from Ecclesiastes, where the cello, playing a deeply lyric and speaking line of prodigious technical difficulty, can be seen as ‘the incarnation of King Solomon’, as Bloch himself wrote. The other large-scale work for cello and orchestra, Voice in the Wilderness, is of a darker hue. Both works reveal a composer whose works should be firmly in the canon of twentieth-century symphonic writing.

The cellist here is Natalie Clein, a celebrated figure in British musical life since winning BBC Young Musician of the Year in 1995 and now a formidable artist, possessed of great musical, technical and intellectual gifts.

As one might expect, Clein delivers a powerfully committed performance, but also manages to avoid over-indulgence, negotiating the peaks and troughs of the music's volatile emotional language with a clear sense of direction...Volkov brings a welcome transparency to Bloch's languorous instrumentation in the reflective sections.

one of the pleasures of the recital is the meeting of minds between orchestra and soloist, each perfectly partnering the other...It's a lovely piece of programming, tenderly performed.

Clein's performance [of Schelomo] concentrates, most affectingly, on the atmosphere of deep introspection...thoughtful, subtle and satisfying, well supported by the passionate and spirited BBC Scottish SO...The Bruch, too, receives a lovely performance, with Clein bringing out the different colour of each of the cello's strings and the orchestra effecting most beautifully the transition from sombre to heavenly.

She and Volkov give a performance of Schelomo (1916) that is very moving, both in its profound sensuality and in the pervasive sense of transience that gnaws at its vision of worldly glory...Beautifully done, [Kol Nidrei] brings the disc to a reflective close. Highly recommended.

Clein is the cello protagonist in all four works, her range of tonal colour, her animation and her discreet soulfulness proving to be ideal qualities...Kol Nidrei is one of the most beautiful works in the entire cello canon, a factor that this performance conveys in a blend of tranquillity and heartfelt ardour.