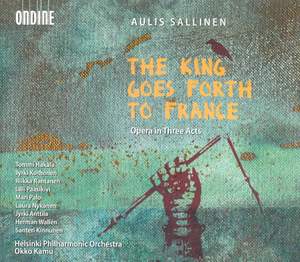 Sallinen: The King Goes Forth to France

A dark yet wickedly funny opera from 1984 with roots somehow simultaneously in the Hundred Years War, the future, and our own environmentally challenged present, with the spectre of an idealistic... — Andrew McGregor, bbc.co.uk, 10th June 2006 More…

A dark yet wickedly funny opera from 1984 with roots somehow simultaneously in the Hundred Years War, the future, and our own environmentally challenged present, with the spectre of an idealistic leader who becomes a corrupt, warmongering tyrant...The cast has no weaknesses and is very well balanced - and much the same could be said of the recording

The King Goes Forth to France (1980-83) was Sallinen's third opera and is regarded by many commentators as the composer's most problematic.
On the contrary, it is the best and most profound, and its impact on Sallinen's subsequent music is incalculable. Subtitled a 'Chronicle for the Music Theatre of the Coming Ice Age', The King GoesForth is a bitingly satirical musical allegory. Sallinen has referred to it as a 'fairy-tale for adults' and there are undoubtedly fantastical elements in the storyline, which blends the past, present and one possible future into a dark yet vivid vision of the corruptibility of absolute power.
The premise of the opera, to Paavo Haavikko's libretto based on his own radio play, is this: at some point in the near future, England will be overwhelmed by the advance of a new ice sheet.
The Prince, whom the Prime Minister is urging to take a wife (even providing a quartet of nubile candidates: the two Carolines and two Annes), decides instead that the only safe course is to abandon England (and, presumably, the old King) and cross the Channel on a bridge of ice to resettle in France – where he is declared King.
Along the way, however, the events of the Hundred Years' War unfold again with the Battle of Crécy and Siege of Calais refought to the same result. In the meantime, the King has married, for political reasons, a German Princess and immediately pawned her (and his crown) to raise funds for his campaign. As Calais falls once more – the tale recorded by a new Froissart – and a storm signals the advance to Paris and the onset of spring, the King instructs his chronicler to omit him from history, abrogating all responsibility, claiming to have been made by Time.
Those familiar with Sallinen's Fourth Symphony, Fifth Quartet or, especially, the orchestral prelude Shadows will recognise several strands in the music. Brilliantly scored, the orchestral contribution is crucial, underpinning the foreground action – often with emotional correctives, such as the chirpy march that accompanies the flaying of the Archer – and the word-setting and dramaturgy have the effectiveness of Britten or Henze. The cast is uniformly good, although Tommi Hakala as the King cannot banish memories of Jorma Hynninen in the premiere productions, while Lilli Paasikivi shines as the mentally fragile Caroline with the Thick Mane. Ondine's spectacular sound catches both the quietest ruminations of the four women and the explosive eruptions of the King's great cannon, Parliament. Highly recommended.