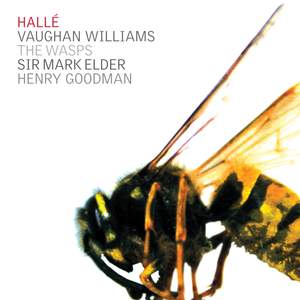 This recording has just about everything: robust comedy, sharp wit, sensuous delight, emotional uplift and food for thought all in one package. — BBC Music Magazine, May 2006, 5 out of 5 stars More…

Vaughan Williams: The Wasps, Act I

No. 3, Melodrama and Chorus

Procleon "Boys, Your Song Brings Tears to My Eyes..."

Procleon "Then All Hell Breaks Loose"

Procleon "Imagine How it Feels..."

No. 7, Melodrama and Chorus

Procleon "So Sandra Starts in..."

No. 8, Melodrama and Chorus

No. 9, Entr'acte and Introduction

Procleon, "Well, I was in the Depths of Depression…"

No. 10, Melodrama and Chorus

Padre "Let the Jury be Seated"

No. 11, March Past of the Witnesses

Procleon, "So, Wok, What's the Evidence?"

Procleon "So, How Do You Like My New Outfit?"

Procleon "Great Wine They Had at That Dinner!"

Following the internationally successful releases on the Hallé Label of recordings of works by Elgar and other British composers, Mark Elder and the Hallé announce the world premiere recording of Vaughan Williams's The Wasps in a new performing edition prepared by David Pountney.

* The recording is supported by the Vaughan Williams Estate and is produced in association with BBC Radio 3.

* Written in 1909 for a Cambridge University performance in Greek of the comic satire 'The Wasps' by Aristophanes.

* The full score is astonishingly theatrical and blends melodrama with satire and light-hearted music, including patter songs and dances, with great skill.

* This world premiere recording features the play presented in a new performing version with text translated for the first time into English and prepared by the writer and opera director, David Pountney.

* The recording features Henry Goodman as the narrator; a virtuoso part requiring the portrayal of many roles including the protagonist Procleon and the antagonist, his son.

* This two-CD set features the full score of eighty minutes and Pountney's incorporated dialogue of some twenty-five minutes, plus the well-known Wasps Suite.

This recording has just about everything: robust comedy, sharp wit, sensuous delight, emotional uplift and food for thought all in one package.

…there's abundant pleasure and intrigue to be had in spotting the folk tunes (both real and suggested), witty snatches of other composers (Debussy, Parry, Mendelssohn and Lehár) as well as frequent glimpses of greater achievements to come - witness the extended (21 minute) choral 'Parabasis' that concludes Act 2. I'm happy to report that Mark Elder and his combined Hallé forces (who have been most realistically captured by the microphones) enter the fray with customary polish and infectious gusto.