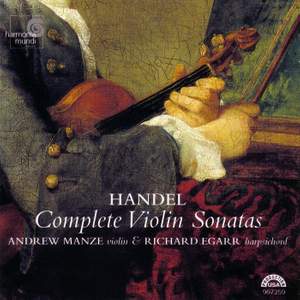 Uncertainty over the authenticity of the violin sonatas, coupled with the fact that Handel and his publisher were notoriously imprecise about which instruments his various solo sonatas were even... — Gramophone Classical Music Guide, 2010 More…

Handel: Andante for violin & continuo in A minor, HWV 412

Uncertainty over the authenticity of the violin sonatas, coupled with the fact that Handel and his publisher were notoriously imprecise about which instruments his various solo sonatas were even intended for, has no doubt prevented many violinists from embracing them as they might in these scholarly times. But there's certainly a good CD's worth of material to be had, even if only five sonatas are thought to be definitely by Handel. Andrew Manze and Richard Egarr offer these, plus three questionable works originally published in one or other of two versions of Handel's Op 1 set of mixed solo sonatas and two authentic one-movement fragments. There isn't an unenjoyable note.
The recording was made immediately after this pair's Gramophone Award-winning set of sonatas by Pandolfi (Harmonia Mundi), and it shows them in the same world-beating form.
These are performances brimming with vitality and imagination, transforming these sonatas from the polite, even rather staid music you might expect, into grand dramas full of incident, excitement and many little moments that make you sit up and listen. Manze's violin sings with wonderful, glowing tone (he's not afraid to use vibrato to achieve it), to which he adds a joyous assortment of flowery ornaments and emphatic double-stoppings. Egarr's contribution is no less crucial; surely the most inspired continuo improviser around at present, he draws an astounding and mercurial array of colours and textures from his harpsi chord. Whatever he does, though, it's never routine. This is a great chamber-music recording, made by a duo who complement each other to perfection.