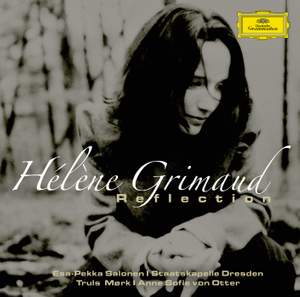 …even if her Schumann Concerto had come out on its own… I'd still strongly recommend it. From her first two forte chords it is clear this is going to be something special. Every single phrase,... — BBC Music Magazine, February 2006, 5 out of 5 stars More…

I. Er is gekommen in Sturm und Regen

…even if her Schumann Concerto had come out on its own… I'd still strongly recommend it. From her first two forte chords it is clear this is going to be something special. Every single phrase, change of mood or colour, sounds as though it has been lovingly rediscovered.

If you've heard this lovely work [the Concerto] once too often in a merely average performance, then drink deeply at Grimaud's spring, for you'll leave refreshed...not an overblown romantic gesture, and no cloying sentimentality; instead a strong, straightforward reading where every note seems just so, yet without feeling calculated.

Hélène Grimaud presents us with a second lovingly themed gift, this time mirroring the entwined love of Robert and Clara Schumann and their adored protégé, Johannes Brahms. Grimaud's performance of Robert's Piano Concerto is a superbly bracing riposte to more indulgent and sentimental readings. Brilliantly partnered by Esa-Pekka Salonen, who conducts with all the joy of first discovery, she launches the work with fierce authority before playing the principal theme with a rare sense of its expressivo and affetuoso character. She is no less bold and impassioned partnering Anne Sofie von Otter, an ideal match for a singer whose intensity and vision leave you in no doubt that Clara was a more-than-gifted composer as well as a great pianist. ...joins Truls Mørk in the E minor Cello Sonata, where you get an almost palpable sense of the artists lifting each other to heights they might find hard to achieve alone. Few performances on record have a more robust eloquence and fervour.