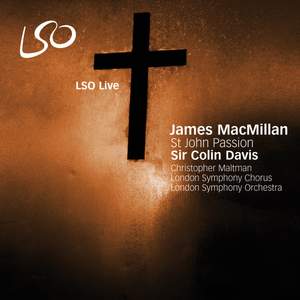 An 80th-birthday gift for Sir Colin Davis, James MacMillan's 90-minute setting of the St JohnPassion divides into two parts and is cast in 10 movements, the last of which comprises a deeply affecting... — Gramophone Classical Music Guide, 2010 More…

Part I, I. The Arrest of Jesus

Part I, II. Jesus Before Annas and Caiaphas, Peter Disowns Him

Part I, III. Jesus Before Pilate

Part I, IV. Jesus Is Condemned to Death

When Sir Colin Davis was asked to select a composer to write a new work for his 80th birthday he chose James MacMillan, about to celebrate his own 50th birthday. MacMillan had previously considered writing a passion and used the opportunity of the commission to produce a setting based on the Gospel of St John.The result is a highly dramatic passion, fusing MacMillan's own Catholic faith, compositional style and musical influences with the long tradition of settings for the passion of Christ in both the Catholic and Lutheran faiths. In addition to the choir and orchestra, MacMillan uses a small choir of professional singers to provide the narration and a solitary baritone soloist to portray Christus.The work received its première on 27th April 2008 at the Barbican, in London, and follows the LSOLive release of two of James MacMillan's earlier works: The World's Ransoming and The Confession of Isobel Gowdie in January 2008.

"Clearly,the archbishop shared the ecstatic audience's view that a great new work had entered the repertoire. MacMillan's writing made huge demands on the London Symphony Chorus, but they sang with distinction, producing some inspiring sound, particularly in the ravishing tone clusters of the opening pages. Chief credit for the night's success should go to Joseph Cullen, the LSC's director, who not only rehearsed the chorus, but also selected and trained the superb professional narrator choir" The Observer

"The first performance of his St John Passion by Sir Colin Davis and the London Symphony Orchestra and Chorus drew a standing ovation from the Barbican audience last Sunday. Among the first to his feet was the Archbishop of Canterbury … there can be no doubt that his Passion is a towering monument of Catholic culture" Catholic Herald

"James MacMillan has delivered a St John Passion that stirred its premiere audience to a standing ovation, Maltman sought out the lyrical core of this striking portrayal, while acknowledging its angry edge. Both choruses delivered with panache, while Sir Colin Davis - in a work commissioned for his 80th birthday - conducted the LSO with the directness he brings to one of the select few living composers that he champions" The Independent

An 80th-birthday gift for Sir Colin Davis, James MacMillan's 90-minute setting of the St JohnPassion divides into two parts and is cast in 10 movements, the last of which comprises a deeply affecting and cathartic orchestral elegy (described by the composer as 'a song without words'). A baritone is allotted the sole principal part of Christus, a chamber choir acts as the Narrator/Evangelist and a large chorus is assigned all other duties. In the booklet Mac- Millan relates how some ideas from his 2007 opera The Sacrifice have found their way into the score. “I was also aware,” he continues, “of the paradoxical tension created between the two highly contrasted musical contexts – liturgical chant and music drama.” In the central role Christopher Maltman gives one of his finest performances to date, sonorous, assured and reassuringly firm of tone. The choral and orchestral contributions are likewise beyond reproach, with the superb LSO brass in particular totally unfazed by MacMillan's at times scarily vertiginous demands. The microphones convey it all with startling immediacy, although, as is customary from this source, there's precious little in the way of ingratiating glow.
Even after a number of hearings, nagging doubts remain as to whether the work as a whole measures up to the exalted level of inspiration or possesses quite the communicative force of Quickening but it's valuable to have such an imperious realisation of what is a hugely sincere and often gripping narrative. MacMillan's many admirers will deem it an essential acquisition.

In the central role Christopher Maltman gives one of his finest performances to date, sonorous, assured… and reassuringly firm of tone. The choral and orchestral contributions are likewise beyond reproach, with the superb LSO brass in particular totally unfazed by MacMillan's at times scarily vertiginous demands.