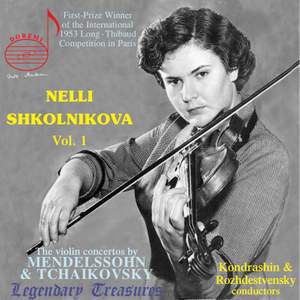 Nelli Shkolnikova (1928-1910) was taught by Yuri Yankilevich at the Moscow Conservatory. In 1953 she won the First Prize at the Long-Thibaud Competition in Paris as well as the special Ginette Neveu prize for her performance of the Tchaikovsky concerto. Critics praised her ''vivid artistic personality'', her ''warm and limpid tone'', and ''extraordinary technical brilliance''. Shkolnikova's remarkable performance in Paris launched her international concert career. She performed with such conductors as Rozhdestvensky, Munch, Kondrashin, Cluytens, Sanderling, Masur, Comissiona, Krips, Temirkanov, and many others. In the course of three major US tours, she appeared at Lincoln Center and with the Philadelphia Orchestra under Eugene Ormandy. Her international reputation made the Soviet authorities suspicious and in 1970 the Iron Curtain closed on her, confining her talents to the USSR. In 1982 she finally received permission to travel. Hours before she was to return from West Berlin to Moscow, she defected to Australia. Since then, Nelli Shkolnikova has performed in Australia, New Zealand, the Netherlands, the UK and the USA. She has also gained renown as a teacher and served on the faculty of Indiana University's School of Music in Bloomington. Shkolnikova held her students to the highest standards, impeccable technique, and a rich tonal sonority. She was frequently on the juries of international violin competitions. This CD includes her recordings of the violin concertos by Mendelssohn (with Rozhdestvensky 1973) and Tchaikovsky (with Kondrashin 1959) and Shkolnikova's live performance given in Paris on June 23, 1953, a few days after her winning the First-Prize at the International 1953 Long-Thibaud Competition.