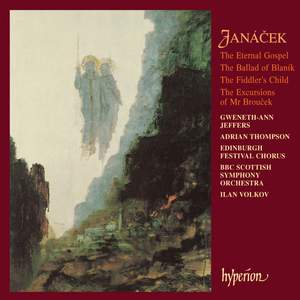 Janáček's 'legend' The Eternal Gospel is a seemingly odd undertaking for its agnostic composer… but its prophecy of a universal kingdom of love inspired him to music of surging lyricism. As... — BBC Music Magazine, September 2005, 4 out of 5 stars More…

I. And so it will pass, as written in the scriptures!

III. O hearken, you whose heart is faint and wilted!

IV. All this the angel told me at my vigil

Janáček: The Ballad of Blaník

I. Introduction: The late evening

IV. Song of the Hussites

V. Procession of the victors

Janáček's 'legend' The Eternal Gospel is a seemingly odd undertaking for its agnostic composer… but its prophecy of a universal kingdom of love inspired him to music of surging lyricism. As Joachim, Adrian Thompson is suitably ardent and Slavic; as the Angel, Gweneth-Ann Jeffers with her slow vibrato is almost too Slavic. Soloists and chorus sing confidently in what's obviously carefully coached Czech. Elizabeth Layton contributes silvery violin solos, and under its young Chief Conductor Ilan Volkov the BBC Scottish Symphony Orchestra is idiomatic and incisive. The cantata is complemented by orchestral music from the same decade, the 1910s, when Janáček's extraordinary late-flowering genius was approaching its height... The performances are again excellent...

Fans of the Glagolitic Mass should definitely make a beeline for Janácek's 1913 cantata The Eternal Gospel. Radiating a comparable spiritual and theatrical fervour, it's a setting of a text by Jaroslav Vrchlický inspired by the commentary on the Book of Revelation by the 12th-century mystic Joachim of Fiore, that serves up a seductive brew of rapt lyricism and tingling drama. Much of the solo vocal writing possesses a truly operatic scope and there are some memorably ardent choral interjections. The gifted young Israeli conductor Ilan Volkov masterminds a laudably disciplined and full-throated account of this bracing rarity, and the sound has commendable spread and amplitude (especially in its SACD format).
The rest of the programme is no less enticing.
The Fiddler's Child (1913) and The Ballad of Blaník (1919) are compact and often bewitchingly lovely tone-poems with patriotic leanings; and the disc concludes with an orchestral suite from the satirical two-part opera The Excursions of Mr Broucek (1908-17). A thoroughly diverting 21-minute sequence it makes, too: just try the fairground sway of the 'Moon Waltz' or the young lovers' ineffably tender tryst ('Before Dawn') that brings the curtain down on the first half. If it's festive spectacle you're after, the last two movements ('Song of the Hussites' and 'Procession of the Victors') have it by the spadeful.
Performance-wise, there are no real grumbles.
Although the music-making has not quite the irresistible tang you get from native interpreters in this repertoire, Volkov (not yet 30 and with talent to spare) directs with considerable flair and sensitivity. If their string section inevitably can't match up to, say, the Czech PO's for sheer heft or tonal lustre, the BBC Scottish SO play with admirable precision and infectious enthusiasm; leader Elizabeth Layton is a warm-hearted, songful presence in The Fiddler's Child. Hyperion's glowing natural sound-frame sets the seal on a first-rate anthology.