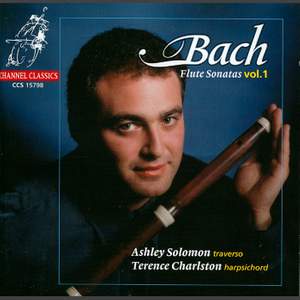 This is an impressive and enjoyable CD that easily bears repeated listening. There's a soothing quality to the Baroque flute, and its gentle, slightly reedy tone is captured very well here.
It's... — Gramophone Classical Music Guide, 2010 More…

This is an impressive and enjoyable CD that easily bears repeated listening. There's a soothing quality to the Baroque flute, and its gentle, slightly reedy tone is captured very well here.
It's closely recorded in a church acoustic to give a brilliant tone with added depth. Today's makers of the Baroque flute are producing highly refined instruments, exemplified here by the Rod Cameron copy of a Denner, which has a strong, even tone and good balance of register, allowing highly accomplished performers like Ashley Solomon complete technical freedom.
This recording isn't merely music therapy, however, but a genuine musical experience. His performance of the unaccompanied A minor Partita, for example, is nothing short of commanding: the control in articulation and breathing allows the phrasing to be flexible and unfussy. It's the directness of his interpretations that's so telling; there's almost none of that slightly coy rubato that some other flautists use to disguise the need to breathe. Rather, Solomon ensures that the phrases are neither choppy nor fragmented. He has an excellent sense of the longer line and the harmonic pull beneath Bach's wonderfully melodic writing. The faster movements are perhaps the most successful, full of buoyancy and energy without seeming rushed or pushed. Try the second movement of the E minor Sonata, for example, or that of the C major. Slow movements are far from inexpressive, but again refreshingly direct: he never wallows (a good example is the introductory movement of the E major Sonata).
Solomon is well partnered by Terence Charlston on a rich-toned Ruckers-copy harpsichord.
Even if you already have a version of Bach's flute works on CD this can be strongly recommended, and it makes an equally good first-time buy too. Prepare to be uplifted.