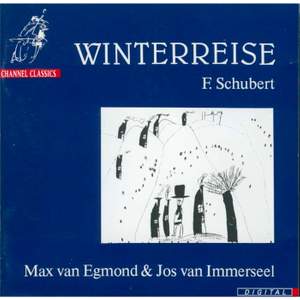 Max van Egmond and Jos van Immerseel have utilized the Urtext edition der Neuen Schubert Ausgabe (Bärenreiter 7003) for this performance. The transpositions for middle voice allow, in almost all cases, the relationships between various tonalities used to remain intact. In subtle fashion some ornamentation has been used the vocal part,following the practice of Schubert and his singer Vogl. The instrument used on this recording is a fortepiano built by Christopher Clarke after late 18th century examples by Walter. Instruments of such quality were used well into the 19th century, and certainly known by Schubert himself, although he most certainly was acquanted with more "modern" builders such as Graf, with larger range and even greater dynamics.