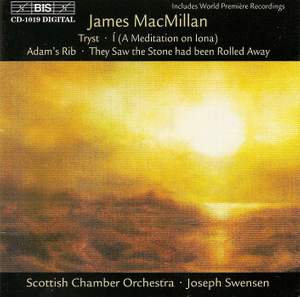 This is the third recording of Tryst – extraordinary for a contemporary orchestral work. But its individuality is still as striking now as when it first appeared: especially so in this taut,... — Gramophone Classical Music Guide, 2010 More…

MacMillan: They Saw the Stone had been Rolled Away

MacMillan: Ì (A Meditation on Iona)

This is the third recording of Tryst – extraordinary for a contemporary orchestral work. But its individuality is still as striking now as when it first appeared: especially so in this taut, gripping version. MacMillan touches, as warmly and directly as Mahler. The sounds can be violent, acerbic or prickly (as indeed they can in Mahler!); the keening string lament at the heart of the work isn't always easy on the ear, and yet it all speaks – it's plainly the work of someone who urgently wants to tell us something. So too are the performances. Joseph Swensen brings the passionate enthusiasm to Tryst, and to Í, that has made his concerts with the Scottish Chamber Orchestra such events in Scotland. Í (pronounced 'ee') is a quite astonishing work. The subtitle, 'A Meditation on Iona', might suggest something romantically atmospheric, with soft, lilting Celtic accents. In fact this is hard, intense, sometimes eerie music: a tribute to St Columba, the muscular, fiercely contentious monk who brought Christianity to Scotland and founded the monastic college of Iona – perhaps also a reminder of St Paul's words about working out one's salvation with 'fear and trembling'.
Along with this come two short, brooding pieces, which are dominated by the sound of brass: Adam's Rib and They saw the Stone had beenRolled Away, the latter giving more than a foretaste of MacMillan's Symphony, Vigil – the concluding part of the trilogy Triduum. As with Triduum, the success is total: powerful, concise works, powerfully and understandingly performed, in crisp, clear recordings.