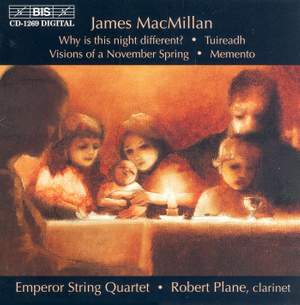 Visions of a November Spring, James MacMillan's First String Quartet, was completed in 1988 and already bears many a stylistic trait of the composer who was to create such a stir two years later... — Gramophone Classical Music Guide, 2010 More…

MacMillan: String Quartet No. 2, 'Why is this night different?'

MacMillan: Visions of a November Spring (String Quartet No. 1)

Visions of a November Spring, James MacMillan's First String Quartet, was completed in 1988 and already bears many a stylistic trait of the composer who was to create such a stir two years later with The Confession of Isobel Gowdie, not least a mastery of the singing line and the distinctive, 'keening' quality of the string writing itself. The work is cast in two movements, the much lengthier second of which perhaps doesn't quite add up to the sum of its impressive parts.
No such reservations, however, apply to the Second Quartet from 1998, whose title, Why isthis night different?, comes from the question posed by the youngest member of the family during the Jewish rite of Seder on the first night of Passover. The father answers by telling of the flight of the children of Israel from Egypt. The result is an arrestingly powerful and sure-footed masterwork, ideally proportioned, economically argued and always evincing a riveting narrative and emotional scope. Similarly, Tuireadh (Gaelic for 'lament') for clarinet and string quartet packs a wealth of pungent and varied expression into its single-movement frame. MacMillan wrote it in 1991 as a 'musical complement' to Sue Jane Taylor's sculpture in memory of the victims of the Piper Alpha oil rig disaster, having also been greatly moved by a letter from a grieving mother who recalled how, during the memorial service, 'a spontaneous keening sound rose gently from the mourners assembled on the boat'. Tuireadh is a deeply compassionate threnody, as is the much briefer, sparer and no less haunting Memento for string quartet (1994), which (as so often with this composer) shows the influence of the ancient oral tradition of Gaelic psalmody still practised in the Western Isles today. Performances throughout are as superlatively disciplined as they're tirelessly eloquent; sound, balance and presentation are all beyond reproach.
Another MacMillan/BIS triumph.