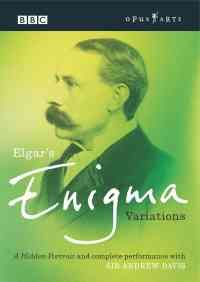 Andrew Davis presents the documentary in an engaging style, giving an overview of the variations, as well as homing in on several of them. …there's a lot of information presented in an unassuming... — BBC Music Magazine, June 2005, 3 out of 5 stars More…

Andrew Davis presents the documentary in an engaging style, giving an overview of the variations, as well as homing in on several of them. …there's a lot of information presented in an unassuming way, and, for anyone coming to this masterpiece for the first time, it's a good way.

Sir Andrew Davis's warmly committed performance of the Enigma Variations, atmospherically recorded in Worcester Cathedral, introduces a highly enjoyable documentary about the work and the 'friends pictured within'. Davis suggests that each variation, as well as reflecting the character of a particular friend, reveals much about Elgar himself, 'like an actor playing many roles'.
Each section is illustrated with archive material and period reconstructions, happily with no dialogue, only Davis's narration. He describes and analyses nine of the 14 variations with orchestral clips and illustrations played on the piano.
So the first variation, 'CAE', depicting Elgar's wife Alice, concentrating on the central majorkey section of the theme, includes a brief, passionate climax, 'showing his depth of feeling'.
'RBT', subject of the third variation, was the treasurer of the local golf club, who got Elgar accepted as a member even though his social class was against him. We're shown what used to be the clubhouse, now set in waste land. 'Nimrod' depicts the publisher August Jaeger and Elgar walking together, and Davis points to echoes of the slow movement from Beethoven's Pathétique Sonata. The intermezzo, 'Dorabella', brings a good portrait of the young Dora Penny, but after a reference to her cycling, ends absurdly on shots of a modern couple roller- blading – an example of fussy and intrusive visual illustration.
Fairly enough, Davis favours the idea that the 13th variation, 'Romanza', represents not Lady Mary Lygon, as has generally been thought, but his first love, Helen Weaver, who emigrated to New Zealand. Irritating are the accompanying shots of a soulful modern teenager on Lambeth Bridge looking at a launch bearing his girlfriend away.
The performance itself has no unwanted intrusions – just a sepia photo of the subject as each variation begins – and is a fine one.