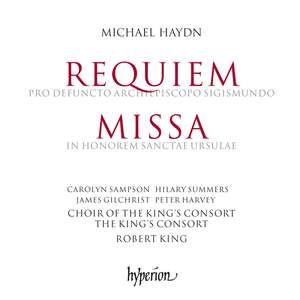 A quality quartet of soloists, led by the vernal soprano of Carolyn Sampson.

Robert King suggests that Michael Haydn's Requiem of 1771 for the Archbishop-Prince of Salzburg reflects a personal outpouring of grief for the loss of Haydn's beloved patron and the recent death of his infant daughter. The fervent expressions of grief, consolation and hope must have made some impression on the 15-year-old Mozart. A comparison with Mozart's Requiem setting of 20 years later is inevitable: Haydn didn't give his solo quartet anything that compares with the immediacy of Mozart's 'Tuba mirum', but the older man's masterful choral writing, brilliant orchestral scoring and sensitive use of solo voices created plenty of musical riches and dramatic moods, such as the brooding Kyrie and the bursting energy of the 'Dies irae'.
The quartet of soloists is impeccable; the choir and orchestra of The King's Consort prove to be increasingly assured and dynamic with each recording released. Robert King's measured and emphatic direction makes it easy to appreciate why the Requiem was performed at his brother Joseph's funeral in 1809.
His interpretation of the sunnier, extrovert Missa in honorem Sanctae Ursulae (1793) helps the music to sound natural and spontaneous. In some respects the Mass is an even finer composition, full of charismatic and inventive musical charms (it's worth buying for Carolyn Sampson's ravishing 'Benedictus' alone).
Anybody who enjoys the choral works of Mozart and Joseph Haydn will be delighted by this double-disc set, and will probably concur that Michael Haydn's neglect in the shadow of his younger friend and older brother is substantially corrected by these exquisite performances.