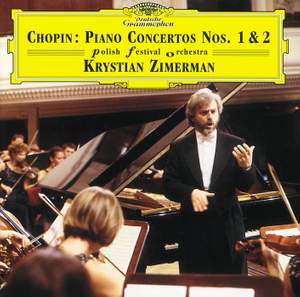 Krystian Zimerman was in his early twenties when he recorded the Chopin concertos for DG two decades ago, with Carlo Maria Giulini conducting the Los Angeles Philharmonic. For his long-anticipated... — Gramophone Classical Music Guide, 2010 More…

Krystian Zimerman was in his early twenties when he recorded the Chopin concertos for DG two decades ago, with Carlo Maria Giulini conducting the Los Angeles Philharmonic. For his long-anticipated remakes he directs the Polish Festival Orchestra from the keyboard, an ensemble he founded and trained from scratch.
Are the results worth all the extraordinary effort (and no doubt expense) that went into this project? In many ways, yes. Helped by DG's exquisite engineering, Chopin's oft-maligned orchestrations emerge with the clarity of a venerable painting scrubbed clean and fully restored.
Not one string phrase escapes unaccounted for.
Every dynamic indication and accent mark is freshly considered, and each orchestral strand is weighed and contoured in order for each instrument to be heard, or, at least, to make itself felt.
Some listeners may find the strings' ardent vibrato and liberal portamentos more cloying than heartfelt, yet the vocal transparency Zimerman elicits from his musicians underscores the crucial influence of bel canto singing on this composer.
If he downplays many of Chopin's dynamic surges and enlivening accents, he compensates with carefully pinpointed climaxes in both concertos' slow movements. The slow timings, incidentally, have less to do with fast versus slow than the pianist's insidiously spaced ritardandos and broadening of tempos between sections. More often than not he lets his right hand lead, rather than building textures from the bottom up, or bringing out inner voices as Argerich does in her more forceful, impulsive renditions. By contrast, some of Zimerman's salient expressive points have calcified rather than ripened with age. Having said that, he has clear ideas of what he wants, and commands the formidable means to obtain the desired results, both at the keyboard and in front of his handpicked musicians. Of the many offerings made to celebrate Chopin's 150th anniversary, Zimerman's achievement stands out.