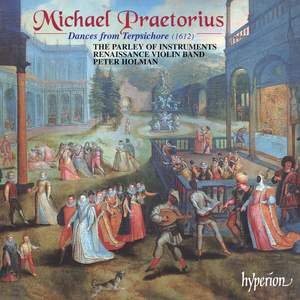 Holman convincingly suggests that they were intended primarily for performance on a French-style violin band, or a lute combination (a group of four lutes play together here), and there is the... — Penguin Guide, 2011 edition More…

Campion: Courante ['I care not for these ladies']

Praetorius devoted most of his life to church music: he published more than twenty collections, mostly of settings of Lutheran chorales, and a number of others are known to have existed in manuscript. He also planned a series of collections of secular music named after the various Greek muses, including Euterpe (Italian and English dances), Thalia (toccatas and canzonas) and Erato (German secular songs). Unfortunately, in the event he managed to publish only one, Terpsichore, musarum aoniarum quinta (1612), consisting of 312 dances in four, five and six parts. The contents of Terpsichore are often assumed to be the compositions of Praetorius himself, however they are collections of different French dance stylessome by him and others are such as harmonisations of melodies supplied by Emeraud; original five-part pieces by Caroubel, a French court violinist; and those he labelled 'anonymous' (pieces received by him in two-part form, to which he just added inner parts). Pipe and tabor and the bagpipes are the only wind instruments used on this recordingthe rest of the instrumentation is for violin bands as it seems that, despite recent recordings and interpretations, the collection was primarily intended for violins.

Holman convincingly suggests that they were intended primarily for performance on a French-style violin band, or a lute combination (a group of four lutes play together here), and there is the instrumentation that he very refreshingly offers.