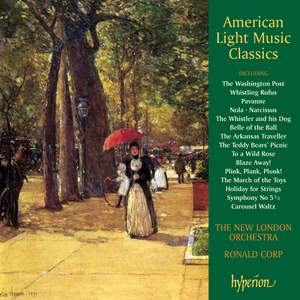 Pryor: The Whistler and his Dog

Anderson, Leroy: Belle of the Ball

I. To a wild rose

Movement. The March of the Toys

They don't write 'em like this anymore. Some of the composers' names may not be familiar (Arndt, Pryor, Bratton, etc.) but it's a fair bet that most of their music will beat least if you're over 'a certain age'. Here are some much-loved American light-music favorites to follow our best-selling CDs of British and European 'light music classics'. Some of these pieces have not been recorded in many a long year (we had great difficulty finding some of the music), and never as well as they are here (there are many intriguing sound effects, from a barking dog to the growling of teddy bears). With its high 'nostalgia' factor we confidently predict that this CD is going to give a great deal of pleasure and put a smile of recognition on lots of faces. (By the way, in case you don't know, Rudolf Friml's Chanson is the original orchestral version of the tune which later became famous as The Donkey Serenade when sung by Allan Jones in the 1938 film The Firefly.)