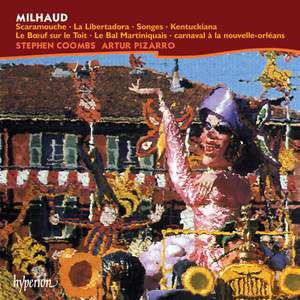 Among the 443 compositions (and more) to which Milhaud appended opus numbers in the course of his long and prolific composing life (from 1910 to 1973) can be found a large number of original works and arrangements for two pianos and piano duet. The majority of the two-piano works appear on this CD (along with his duet arrangement of Le Buf sur le Toit), and among them are some of the most popular of all Milhaud's works. The titles tell us what to expectcolour and flamboyance, high spirits, jazzy rhythms and knockabout good humour, mostly with an American accent: North (Kentucky and New Orleans), Central (La Bal Martiniquais) and South ('La Libertadora' was the nickname of Simn Bolvar, the revolutionary who gave his name to Bolivia).

Milhaud was an inveterate traveller who absorbed influences from many national styles.
The music here exudes infectious dance impulses, languid geniality, knockabout humour and joie de vivre. It may inhabit a limited expressive sphere, but providing you don't expect introspection or searching profundity you won't be disappointed. There's enjoyment at every turn, whether in the foot-tapping 'Brazileira', the Satie-esque simplicity of the 'Valse' from Lessonges, or the breezy music-hall atmosphere of Le boeuf sur le toit, with its wonderfully imaginative piano writing. The performances are exemplary.
Stephen Coombs and Artur Pizarro both enjoy the byways of the piano repertory, and, even if Pizarro is the more starry soloist, they're well matched as a duo. Coombs's top part is suitably bright and sharply lit, and is offset by Pizarro's more subtle colouring. They revel in the protracted playfulness of Le boeuf sur le toit, where their feeling for Hispanic exoticism is matched by their virtuosity. The recorded sound is excellent.

An entertaining and delightful issue which brings some high-spirited pianism from these fine players.