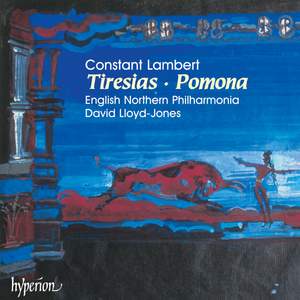 Constant Lambert's Tiresias was commissioned for the Festival of Britain in 1951 and the subject had been preoccupying the composer for over 20 years. In the event, the ailing Lambert struggled... — Gramophone Classical Music Guide, 2010 More…

Act 1 No 1. Entry of the warriors. Allegro giusto

Act 1 No 3. Cortege. Entrance of the young virgins and dance of the priestesses

Act 1 No 5. Tiresias gets angry, beats snakes and changes into a woman

Act 2 Scene 2. Dance of the shepherds and shepherdesses. Piacevole

Act 2 Scene 4b. Return of the snakes. Lento

Constant Lambert's Tiresias was commissioned for the Festival of Britain in 1951 and the subject had been preoccupying the composer for over 20 years. In the event, the ailing Lambert struggled to meet his July deadline and called upon colleagues like Robert Irving, Alan Rawsthorne, Elisabeth Lutyens, Gordon Jacob, Denis Apivor, Humphrey Searle and Christian Darnton to help him finish the orchestration. Lambert directed eight performances in all, but the work was coolly received and he died the following month, just two days before his 46th birthday.
The instrumentation of Tiresias calls for neither violins nor violas and features a notably varied battery of percussion as well as an important role for piano obbligato (brilliantly played here by Michael Cleaver). The music has a dark-hued intimacy and at times starkly ritualistic demeanour which probably baffled that glitzy first-night audience. However, Lambert's achievement is ripe for reassessment, and David Lloyd-Jones's meticulously prepared realisation allows us to revel anew in the score's many effective set-pieces.
Stravinsky and Ravel are prime influences, but the work is suffused with that distinctive mix of keen brilliance and bleak melancholy so characteristic of its creator. The present account is all one could wish for.
Pomona (1927) is much earlier and altogether lighter in tone. Deftly scored for a chamber orchestra of 34 instrumentalists, Pomona comprises eight delightfully inventive numbers whose neo-classical spirit breathes very much the same air as that of Stravinsky and Les Six from the same period. Again, the performance is first-rate and the sound quite admirable.