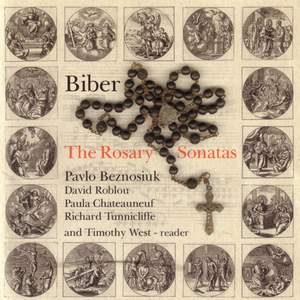 Sonata 4 - The Presentation In The Temple: Reading

Sonata 4 - The Presentation In The Temple: Ciacona

Sonata 5 - The Finding In The Temple: Reading

Sonata 5 - The Finding In The Temple: Praeludium - Allamanda - Guigue - Sarabanda

Sonata 6 - The Agony In The Garden: Reading

Sonata 6 - The Agony In The Garden: Lamento - Presto - Adagio - Adagio

Sonata 8 - The Crowning With Thorns: Reading

Sonata 9 - The Carrying Of The Cross: Reading

Sonata 9 - The Carrying Of The Cross: Courente / Double - Finale

Sonata 13 - The Descent Of The Holy Ghost: Reading

Sonata 13 - The Descent Of The Holy Ghost: Gavott - Guigue - Sarabanda

Sonata 14 - The Assumption Of The Blessed Virgin: Reading

Sonata 15 - The Coronation Of The Blessed Virgin: Reading

Bohemian Catholic composer Heinrich Biber was arguably the most distinguished 17th century composer of instrumental music for the church. His output was not extensive but it was extraordinary, especially his best-known opus, The Rosary Sonatas of the 1670s. Depicting the 15 mysteries of the rosary, these works are remarkable for their vivid programmatic nature, the use of extended techniques such as scordatura (retuning of the violin strings), and virtuostic writing (Biber himself was an accomplished violinist).

Pavlo Beznosiuk, who has been described as a virtuostic artist with “star quality” whose “playing is full of fantasy”, is joined by an ensemble of England’s leading period-instrument performers. Avie's version is unique for its inclusion of the spoken texts which would have been read during Rosary devotions in the 1670s, here eloquently delivered by well-known television and stage actor Timothy West.