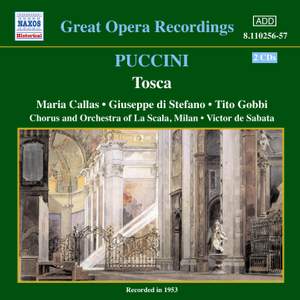 In this remastering of one of the classic performances of the gramophone, one of Walter Legge's masterpieces as a creative recording producer, you barely miss stereo recording. With offstage... — Gramophone Classical Music Guide, 2010 More…

In this remastering of one of the classic performances of the gramophone, one of Walter Legge's masterpieces as a creative recording producer, you barely miss stereo recording. With offstage effects for example – so important in Puccini – precisely placed, there is a sense of presence normally reserved for twin-channel reproduction. In the long duet between Tosca and Cavaradossi in Act 3 you can even detect a difference of placing between the two singers, Callas set at a slight distance, though whether or not to offset a microphone problem with so biting a voice one can only guess. The immediacy is astonishing, and the great moment of the execution with trombones rasping and the fusillade reproduced at a true fortissimo has never been represented on record with greater impact. The contrasts of timbre are beautifully brought out – amazingly wide with Gobbi as with Callas and with di Stefano producing his most honeyed tones. Though there is less space in the Milan acoustic than we have grown used to in the age of stereo, the separation of voices and orchestra is excellent, with the strands of the accompaniment to 'Vissi d'arte', for example, finely clarified. Only in the big Te Deum scene at the end of Act 1 is there a hint of overloading.
Wonderful as Gobbi's and di Stefano's performances are, and superbly dramatic as de Sabata's conducting is, it is the performance of the unique Callas in the title-role that provides the greatest marvel, and here more than ever one registers the facial changes implied in each phrase, with occasional hints of a chuckle (usually ironic) more apparent than on LP. A truly Great Recording of the last Century which is available in numerous guises. Naxos's transfer is particularly impressive, but if you want top-class supporting material, the mid-price EMI is the one to go for.

There has never been a finer recorded performance of Tosca...Gobbi makes the unbelievably villainous police chief into a genuine three-dimensional character, and Di Stefano...was at his finest...The conducting of De Sabata is spaciously lyrical as well as sharply dramatic