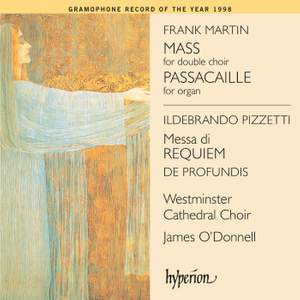 For connoisseurs of choral music this is an essential buy. Outstanding performances of two rarely heard 20th-century masterpieces.

These are magnificent performances.
Written in 1922, the Agnus Dei being added four years later, the Mass is one of Martin's most sublime compositions. Surprisingly it gains enormously from using boys' rather than female voices. It's a measure of James O'Donnell's achievement with Westminster Cathedral Choir that the gain in purity and beauty is never at the expense of depth and fervour.
This is an altogether moving and eloquent performance, often quite thrilling and always satisfying.
This disc brings us a fine performance by O'Donnell of the Passacaille and the Pizzetti Messa di Requiem, also composed in 1922. The received wisdom is that it is in his a cappella music that Pizzetti is at his finest; in his 1951 monograph Guido Gatti spoke of his setting as 'the most serene and lyrical of all... from Mozart's to Gabriel Faure's'. Serene and lyrical it most certainly is, and it will come as a revelation to those encountering it for the first time.
There is a fervour and a conviction about the Westminster performances of both the Requiem and the 1937 De profundis. The luminous tone this choir produce in both these inspired and masterly works will ring in your ears long after you have finished playing this splendidly recorded disc.

The Mass for Double Choir is one of Martin's purest and most sublime utterances. The version from the Westminster Cathedral Choir under James O'Donnell is the most outstanding. The boys produce marvellously focused tone of great purity and expressive power.