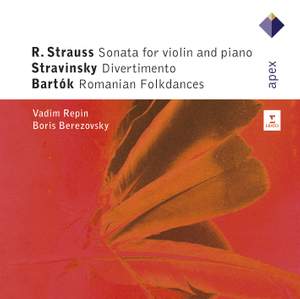 III In one spot

Stylistically, Strauss's lyrical Op 18 (1887) sits poised somewhere between Brahms's chivalrous song cycle Die schöne Magelone and Strauss's own Don Juan of the following year.
The finale is rich in heroics though not before a seductive 'Improvisation' and the appearance of one of Strauss's loveliest melodies. Anyone familiar with Heifetz's three recordings – his second, the first of two with the late Brooks Smith, is probably the most comprehensively expressive – will have a job adapting to anyone else. No one draws a sweeter, more tender opening phrase, though Vadim Repin, like Gidon Kremer, more or less matches Heifetz in terms of repose.
Repin's feline violin faces leonine support from Boris Berezovsky, whose outsize musical personality draws maximum mileage from Strauss's virtuoso piano writing, though he too is capable of relaxing. His elegant fingerwork is nicely demonstrated in the decorative figurations that dominate the third section of the second movement. Kremer and Oleg Maisenberg are also excellent, but Repin's engagement with the music's lyrical element just about gives him the edge . Heifetz is more 'accompanied' by Brooks Smith than partnered by him.
Echoes of Strauss return for the Adagio from Stravinsky's Fairy's Kiss re-run, a witty Divertimento prepared in collaboration with violinist Samuel Dushkin. Repin's strongest current rival is Perlman, though his reading is perhaps less subtly characterised and, again, Berezovsky's strong-arm pianism strengthens the frame. Bartók's ubiquitous Romanian Folkdances are rather less spicy here than you would expect from someone who has fiddled in gypsy style with Lakatos, but Repin's harmonics in the 'Pe loc' third movement are admirably clean and the final dances are suitably dashing.
The sound is very well balanced.