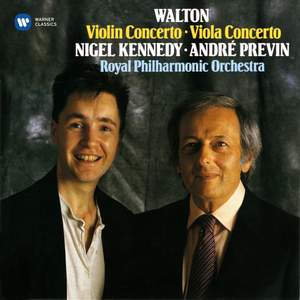 Kennedy is in his element, while Previn captures the lushness of the colourful score. — BBC Music Magazine, Proms 2008 More…

Kennedy is in his element, while Previn captures the lushness of the colourful score.

Nigel Kennedy has stepped in, and – with the uniquely expert guidance of André Previn – produced a recording of both works which in this coupling is unlikely to be bettered for a long time. Even next to the finest individual recordings of the two works, differently coupled, Kennedy provides formidable competition. Warmly expressive as Kennedy's mentor Menuhin was in both works, spaciously romantic and characteristically individual in every phrase, he is not a natural Waltonian, even with the composer to guide him. The comparison with Kennedy is fascinating.
Not surprisingly, Kennedy's jazz sympathies give his playing a natural bite in the sharply syncopated passages so typical of Walton, matching Previn's similarly jazz-founded understanding.
The most controversial point of both interpretations of the Viola Concerto comes in the speed of the Andante comodo first movement. Kennedy is almost as slow as Menuhin and far slower than usual – but his pulse is steadier. The aching melancholy of that lovely opening, the dreamy quality of the second subject (sognando the marking) are caught more hauntingly. In the finale Kennedy's natural contrasting of the romantic and the scherzando sides of Walton are again most convincing, and the epilogue brings the most magic moment, when the pianissimo return of the first movement main theme is so hushed you hear it as though from the distance.
The marking sognando also comes at the opening of the Violin Concerto, and again Kennedy captures it beautifully. You might argue that he is the more dreamy compared with Kyung-Wha Chung on Decca, when his manner is more relaxed, less yearningly intense, a quality which generally makes her performance so magnetic.
Kennedy's is a gloriously rich and red-blooded reading of the whole work, bringing ripe playing in the big romantic melodies balanced with formidable bravura in the contrasting passages written with Heifetz in mind.
For a coupling of two of the most beautiful string concertos written this century, this Kennedy record will set standards for many years to come. The recording is full and rounded, wellbalanced with the soloist's wide dynamic range fully conveyed.