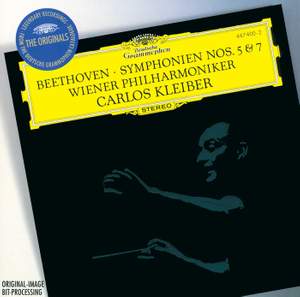 an essential recommendation for any collection. These are performances which seem to present a Beethoven 'for the ages', a distillation of a long interpretative tradition, without concern for... — BBC Music Magazine, January 2012 More…

an essential recommendation for any collection. These are performances which seem to present a Beethoven 'for the ages', a distillation of a long interpretative tradition, without concern for historical accuracy in text or performance practice. The sense of something monumental is enhanced by the imposing Vienna Musikverein acoustic.

The recording of the Fifth, always very fine, comes up superbly in this transfer.
What, though, of the Seventh, an equally distinguished performance though always perceptibly greyer-sounding on LP, and on CD? The result is a performance of genius that now speaks to us freely and openly for the first time. In some ways this is a more important document than the famous Fifth.
Great recordings of the Seventh, greatly played and conducted, but with first and second violins divided left and right, are as rare as gold dust. Freshly refurbished, this Kleiber Seventh would go right to the top of any short list of recommendable Sevenths. It's wonderful to have these two legendary performances so expertly restored.

In Carlos Kleiber's hands the first movement of the Fifth is electrifying, yet still has an underlying hushed intensity...In the Seventh the symphonic argument never yields to the charm of the dance. Incisively dramatic, his approach relies on sharp rhythmic contrasts and thrustful rhythms.

Carlos Kleiber's recordings of the Fifth and Seventh symphonies with the Vienna Philharmonic are surely at the top of most people's lists of legendary Beethoven recordings. The Fifth has an irresistible drive and sense of drama, not least in the famous first movement, and a stately, noble feel to the last movement. For me, though, it's all about the Seventh: Kleiber brings an unmatched vigour, with a breathtaking account of the last movement, aided in no small measure by some boisterous horns.