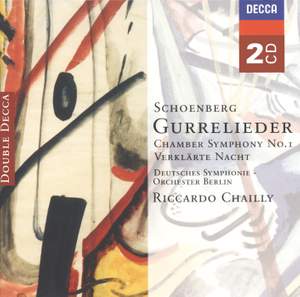 This vast cantata, a direct descendant of Wagnerian music-drama, was for the turn-of-the- century musical scene the ultimate gorgeous sunset. Schoenberg's forces are, to put it mildly, extravagant.... — Gramophone Classical Music Guide, 2010 More…

This vast cantata, a direct descendant of Wagnerian music-drama, was for the turn-of-the- century musical scene the ultimate gorgeous sunset. Schoenberg's forces are, to put it mildly, extravagant. As well as the six soloists and two choruses, the orchestra sports such luxuries as four piccolos, ten horns and a percussion battery that includes iron chains; and so complex are some of the textures that, to achieve a satisfactory balance, a near miracle is required of conductor and recording engineers. Decca has never been mean with miracles where largescale forces are concerned and this set is no exception.
Chailly gives us a superbly theatrical presentation of the score. The casting of the soloists is near ideal. Susan Dunn's Tove has youth, freshness and purity on her side. So exquisitely does she float her lines that you readily sympathise with King Waldemar's rage at her demise. Siegfried Jerusalem has the occasional rough moment, but few previous Waldemars on disc have possessed his heroic ringing tones and range of expression. And Decca makes sure that its trump card, the inimitable Hans Hotter as the speaker in 'The wild hunt of the summer wind', is so tangibly projected that we miss not one vowel or consonant of his increasing animation and excitement at that final approaching sunrise.

Brigitte Fassbaender reigns supreme [as Waldtaube]...Susan Dunn is a vivdly drawn Tove...Best of all, there's finally a Waldemar who measures up to his part: Siegfried Jerusalem, who can sing the role as well as the notes.

Sigefried Jerusalem as Waldemar is not only warm and firm of tone, but imaginative too. Susan Dunn makes a sweet, touchingly vulnerable Tove, while Brigitte Fassbaender gives darkly baleful intensity to the message of the Wood-dove. Hans Hotter is a characterful speaker